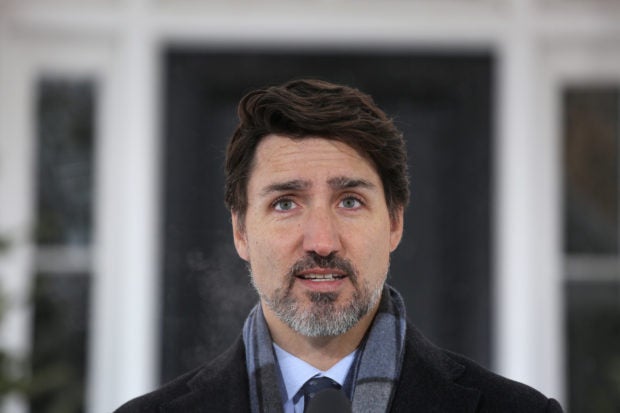 TORONTO — Canadian Prime Minister Justin Trudeau on Thursday ruled out releasing a top Chinese tech executive in an attempt to win the release of two Canadians detained by Beijing.

Trudeau said releasing Huawei’s Meng Wanzhou would tell China that it can get what it wants by arresting Canadians. He said it would put more Canadian citizens at risk by signaling Canada can be intimidated.

“Randomly arresting Canadians doesn’t give you leverage over the government of Canada,” Trudeau said.

Meng, the chief financial officer of Huawei and daughter of the company’s founder, was arrested by Canadian authorities at Vancouver’s airport in late 2018. The U.S. wants her extradited to face fraud charges, and her arrest infuriated Beijing.

In what is widely believed to be an attempt to pressure Canada to release Meng, China arrested former Canadian diplomat Michael Kovrig and Canadian entrepreneur Michael Spavor and charged them with spying.

“We deplore what China did in arbitrarily detaining the two Michaels, in directly linking those arrests,” Trudeau said.

A letter to Trudeau signed by 19 former Canadian politicians and diplomats urges that Meng be freed in a bid to win the release of the detained Canadians. Signatories to the letter include former ministers in Trudeau’s Liberal party as well as former Conservative minister Lawrence Cannon.

“I deeply disagree with them,” Trudeau said. “We cannot allow political pressures or random arrests of Canadian citizens to influence the functioning of our justice system. So I respect these individuals, but they’re wrong.”

Meng is facing fraud charges in the United States but denies the allegations that she misrepresented the company’s relationship with Skycom Tech, putting the HSBC banking company at risk of violating sanctions in Iran. Hearings in the extradition case have been adjourned until Aug. 17.

“Canada has an independent judiciary, and those processes will unfold independently of any political pressure, including by foreign governments,” Trudeau said.

Meng is free on bail, living in her Vancouver mansion. Kovrig and Spavor are jailed, and Canadian diplomats have been refused consular access to them since January.

China also placed restrictions on various Canadian exports, including canola and meat. In January, China also handed a death sentence to a convicted Canadian drug smuggler in a sudden retrial.