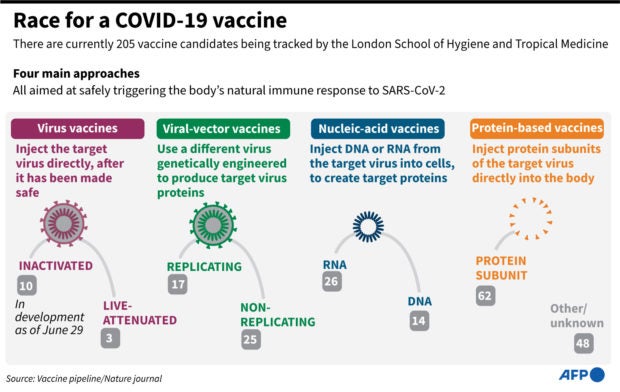 WASHINGTON — BioNTech of Germany and the US pharmaceutical giant Pfizer reported positive preliminary results on Wednesday from a joint project to develop a coronavirus vaccine.

Known as BNT162b1, it produces antibody responses at or above the levels seen in any convalescent serum — blood from people who have recovered — at relatively low doses, according to BioNTech CEO Ugur Sahin.

The preliminary data come from a so-called phase 1/2 trial that aimed to show the vaccine is not toxic and triggers an immune system response to prepare the body to fight off the virus.

A relatively high number of participants developed a fever after the second dose, according to a study uploaded on the pre-publication website medrxiv.org. But this is not unexpected and is not considered a stumbling block.

The vaccine relies on messenger RNA, a genetic code that slips into human cells to make them generate antibodies that are specifically tailored to the coronavirus.

Several companies have published results from the initial phases of clinical trials stating that their experimental vaccines cause an immune system response.

A total of 23 COVID-19 vaccine projects have launched clinical trials on humans, says the London School of Hygiene & Tropical Medicine.

Several have moved to phase two or to phase three, when they are injected into thousands of volunteers to evaluate their effectiveness, monitor side effects and collect other information that will allow them to be used safely.

A vaccine created by the US biotech firm Moderna and one from Oxford University in collaboration with British-Swedish firm AstraZeneca is among those which are in the most advanced stages of development, along with several Chinese projects.

These include one from the company CanSinoBIO, which has received permission to administer the vaccine to Chinese soldiers.