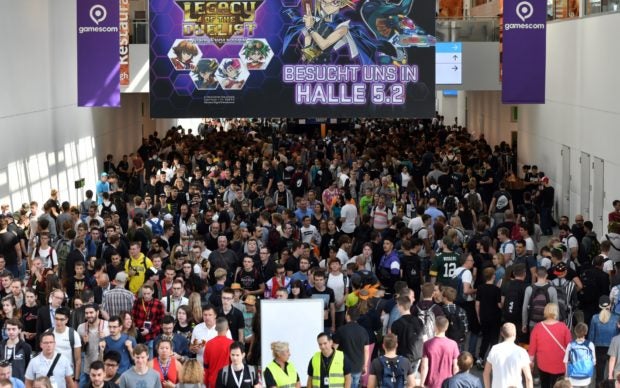 An estimated 373,000 visitors and exhibitors attended Gamescom 2019, and over 500,000 watched its Opening Night Live. Image: AFP/Ina Fassbender via AFP Relaxnews

Where North America’s E3 2020 was canceled outright in response to the COVID-19 pandemic, the world’s biggest video game expo, Europe’s Gamescom, is hosting a digital event with the co-operation of major, mid-level and local publishers.

Activision Blizzard, Electronic Arts, Ubisoft, Sega, Xbox and other major publishers are on board for the Aug. 27 to 30 digital edition of annual video games expo.

Usually situated within the expansive halls of the Koelnmesse in Cologne, Germany, with livestreamed presentations from major players in the games industry, Gamescom 2020 is this year entirely online as a result of measures taken against COVID-19.

Where E3’s usual collection of publishers and console manufacturers elected to host their own range of showcase presentations, independent of any E3 structure, Gamescom has four days of broadcasts from a selection of small, medium-sized, and landscape-shaping marques.

Some, such as EA, Ubisoft, and Xbox, have already hosted their own showcases, while others — notably “The Elder Scrolls” and “Fallout” publisher Bethesda — have not.

While E3 is considered the year’s most impactful video games conference, thanks in part to its mid-year positioning and glut of announcements, Gamescom occupies the most showfloor area and attracts more visitors.

Gamescom organizers indicate that they expect the new console generation to surface as a prominent trend, given the year-end releases of the Xbox Series X and PlayStation 5.

For its German audience in particular, educational games are to form another strong trend, especially given this year’s focus on digital education in the light of COVID-19 and the widespread school closures that followed. IB

Worst is behind us; but we’re not yet out of the woods – BSP chief