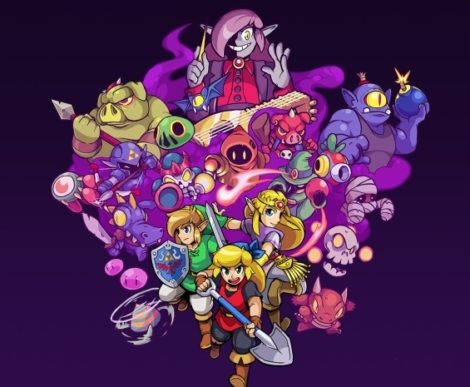 An official crossover between the creator of indie hit “Crypt of the NecroDancer”, in which the hero’s journey takes place in time to the beat of a song, and Nintendo’s “Legend of Zelda” franchise, “Cadence of Hyrule” is welcoming a Character Pack, Melody Pack and a story extension.

The Character Pack, released immediately on July 20, features five new characters for players to experiment with and master: Impa and her far-reaching Naginata spear weapon; Aria, who must stay on the beat at all costs; “Cadence of Hyrule” shopkeeper Frederick; and grey incarnations of the “Zelda” franchise leads in Shadow Link and Shadow Zelda.

The Melody Pack includes 39 songs and remixes, while Symphony of the Mask adds a new map, a new selection of songs and a new character to play as, the mysterious Skull Kid. Those latter two packs are to release before the end of October, while a Season Pass includes all three (once available) with some bonus costumes for Link and Zelda to incentivize the blind-buy or, come October, bulk purchase.

In fact, Nintendo’s United Kingdom branch anticipates the Melody Pack for August and Skull Kid’s story for September, leaving October 23 for a repackaged all-inclusive version of “Cadence of Hyrule”.

Though the “Shin Megami Tensei” franchise has not yet debuted on Nintendo Switch, 2009’s “SMT: Strange Journey” and 2013’s “SMT IV” were made internationally available on Nintendo’s respective predecessor handhelds, the DS and 3DS.

Perhaps just as relevant is the success of its “Persona” spin-off role-playing adventure series, whose 2008 “Persona 4” and 2016 “Persona 5” are well known among fans of the genre, even if the pair are not at this time available on Switch.

Also in July’s Nintendo Direct Mini Partner Showcase, multiplayer shooter “Rogue Company” was given a little visibility bump an hour ahead of its cross-platform release across Switch, PlayStation 4, Xbox One and Windows PC, as was arcade wrestler “WWE 2K Battlegrounds” (Sept. 18, also on PS4, XBO, PC and Stadia). CL