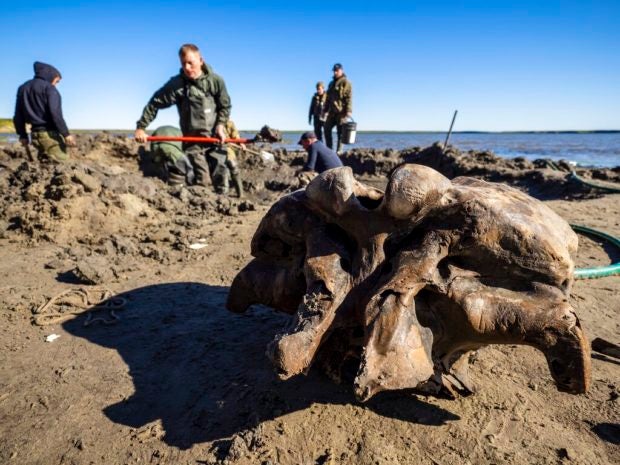 MOSCOW — Russian scientists are working to retrieve the well-preserved skeleton of a woolly mammoth, which has some ligaments still attached to it, from a lake in northern Siberia.

Fragments of the skeleton were found by local reindeer herders in the shallows of Pechevalavato Lake on the Yamalo-Nenets region a few days ago. They found part of the animal’s skull, the lower jaw, several ribs, and a foot fragment with sinews still intact.

Woolly mammoths are thought to have died out around 10,000 years ago, although scientists think small groups of them may have lived on longer in Alaska and on Russia’s Wrangel Island off the Siberian coast.

Russian television stations on Friday showed scientists looking for fragments of the skeleton in the lakeside silt.

Scientists have retrieved more bones and also located more massive fragments protruding from the silt. They said it would take significant time and special equipment to recover the rest of the skeleton — if it had all survived in position.

Yevgeniya Khozyainova of the Shemanovsky Institute in Salekhard said in televised remarks that finding the complete skeleton of a mammoth is relatively rare. Such finds allow scientists to deepen their understanding of mammoths.

Several well-preserved frozen carcasses of mammoths have been found in the permafrost of northern Siberia.