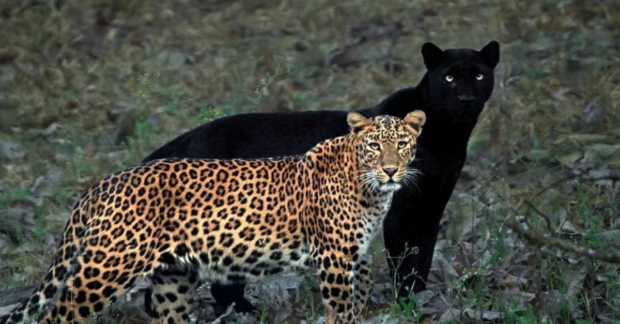 A photographer managed to take a rare photo of a leopard and black panther walking together in a forest in Karnataka, India.

The photographer, referred to as Mithun H, captured the awesome moment at the Kabini Forest Reserve during the winter season last year, as per The Indian Express yesterday, July 25.

The image shows the black panther standing behind the leopard while they face the camera, as seen on Mithun’s Instagram page on July 19.

The Eternal Couple . Saaya and Cleopatra have been courting since 4 years now and whenever they are together it’s a sight to behold. The forest comes alive as they trot nonchalantly in his fabled kingdom. Usually in the courting pairs generally it is the Male who takes charge and moves around with the female following close behind. But with this couple it was definitely Cleo who was in charge while the Panther followed. . This was shot on a surreal winter morning when a single Deer alarm led me to this breathtaking sight. . #kabini #love #leopard #nikon #wild #Natgeo #mithunhphotography #instagood #instadaily #jungle #bigcat #forest #wildlifephotography #nature #wildlife #blackpanther #melanistic #therealblackpanther #thebisonresort

Mithun dubbed the photo as “The Eternal Couple”, explaining that the leopard named Cleopatra, and Saaya the panther, have been courting for already four years.

“Usually in the courting pairs generally it is the [m]ale who takes charge and moves around with the female following close behind,” he noted. “But with this couple it was definitely Cleo who was in charge while the [p]anther followed.”

Mithun later told the publication that he stayed in the same spot for six days to capture the image. He noted that he could hear the two animals mating about 100 meters away but could not spot them due to limited visibility.

“They had made a large kill and would not move until it was over,” Mithun, with 12 years of wildlife photography, explained.

Following the successful hunt of the couple, Mithun waited at a spot at the edge of the panther’s territory where the male feline would take the leopard after consuming their prey.

“It was a fruitful wait though,” Mithun said in the report. “I could wait for [six] years for a moment like this.”

He also pointed out that Cleopatra has been in the reserve since 2009 while Saaya arrived in 2014 “as a [sub-adult] shy cat trying to establish territory.” However, the two only began courting when Saaya finally managed to assert his dominance in 2016. Mithun has been following the two animals since.

While Mithun has already photographed the couple in the past, he stated that it was the animals’ gaze into the camera that made the said image go viral.

Mithun has also worked with National Geographic on the documentary “The Real Black Panther”, as per report, which centers on Saaya and his life in the reserve. Ryan Arcadio/JB