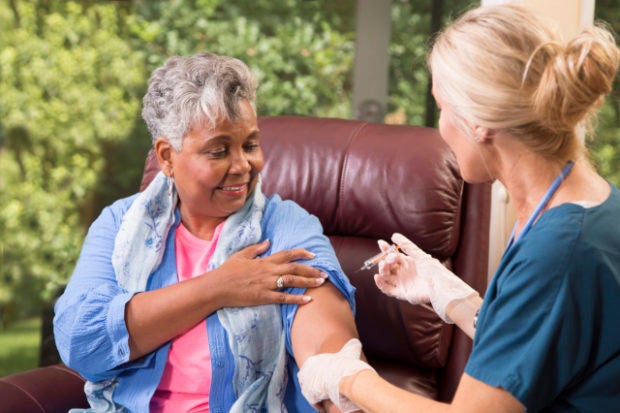 Getting a flu shot could help reduce the risk of Alzheimer’s disease, according to new research. Image: Istock.com/Pamela Moore via AFP Relaxnews

Three new studies presented at the Alzheimer’s Association International Conference (AAIC), which runs July 27 to 31, 2020, suggest that getting a pneumonia vaccine or the annual flu shot could lower the risk of Alzheimer’s disease in seniors.

In the first of the three studies reported at AAIC 2020, researchers at the McGovern Medical School at The University of Texas Health Science Center at Houston looked at data on 9,066 Americans. They found that getting just one flu vaccination was linked with a 17% reduction in the prevalence of Alzheimer’s disease. Consistently getting an annual flu shot lowered the rates by a further 13%. The team also found that patients who got their first flu shot at a younger age, age 60, benefited from bigger risk reductions than those who got their first flu shot at age 70.

In the second study, a team from Duke University Social Science Research Institute examined possible links between the pneumonia vaccine and Alzheimer’s risk. After looking at 5,146 participants they found that receiving the vaccine between the ages of 65 and 75 reduced the risk of developing Alzheimer’s by 25 to 30%, even after accounting for other potential factors such as sex, education and smoking status, and by up to 40% if the subject did not have a certain gene that has been linked to pneumonia risk.

The third study, by the University of Copenhagen in Denmark, didn’t look at vaccinations to prevent infection, but 1,496,436 aged over 65 who had visited the hospital with an infection. The team found that people with both dementia and an infection died at a 6.5 times higher rate compared with people who had neither dementia nor an infection, while those who had an infection but not dementia had a 3-fold increased risk.

“With the COVID-19 pandemic, vaccines are at the forefront of public health discussions. It is important to explore their benefit in not only protecting against viral or bacterial infection but also improving long-term health outcomes,” said Maria C. Carrillo, Ph.D., Alzheimer’s Association chief science officer.

“It may turn out to be as simple as if you’re taking care of your health in this way — getting vaccinated — you’re also taking care of yourself in other ways, and these things add up to lower risk of Alzheimer’s and other dementias,” she added. “This research, while early, calls for further studies in large, diverse clinical trials to inform whether vaccinations as a public health strategy decrease our risk for developing dementia as we age.”