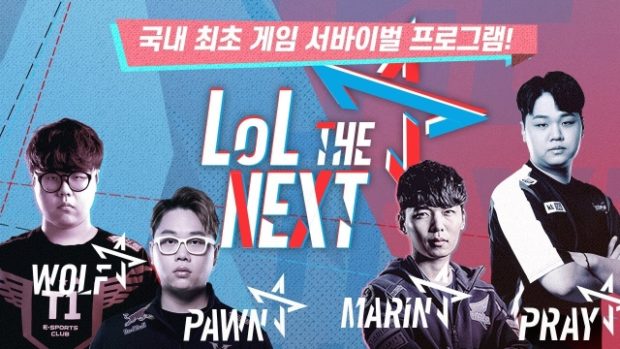 Four professional “League of Legends” players will pick the next rising stars in reality show “LoL THE NEXT”. Image: Courtesy of Riot Games/YouTube LLC via AFP Relaxnews

Enormously popular video game “League of Legends”, which has been a vehicle to fame and fortune for the world’s best players, is to lay bare the team recruitment process — or a form of it — via Korean show “LoL: THE NEXT”.

Having demonstrated their skill by achieving the “League of Legends” diamond-tier ranking, 100 hopefuls are in the mix for a share of a 50,000 South Korean won prize ($42,000, P2 million) and what’s being mysteriously described as a unique opportunity.

From the initial 100, 10 will be selected for coaching by four Korean pros or ex-pros — Lee “Wolf” Jae-wan and Heo “PawN” Won-seok for one team of five, Kim “PraY” Jong-in and Jang “MaRin” Gyeong-hwan for the other.

“LoL THE NEXT” is to debut on Aug. 2 at 3:30 p.m. Korea Standard Time on the official YouTube and Twitch channels run by Korea’s top tier League of Legends competition, the LCK.

The annual “League of Legends” World Championship delivered tournament prize pools of between $2 million and $5 million (P91.8 million and P245 million) between 2015 and 2019.

Recent iterations of the event have taken place in October, though details concerning 2020’s World Championship, originally to take place in Shanghai, China, are still to be confirmed given the COVID-19 pandemic. RGA