NASA again invited the public to have their names sent to Mars on a future mission to the planet.

The space agency revealed that they have reopened the opportunity via a statement on its website last Friday, July 24.

The invitation came as they prepared for the launch of the new Mars rover named Perseverance. The rover is scheduled for liftoff today at 7:50 a.m. Eastern Daylight Time or 7:50 p.m. in the Philippines.

“When Perseverance launches to Mars, it will carry three dime-sized chips with 10.9 million names submitted by people all over the world,” the agency said.

The previous names came from NASA’s last call for submissions. While there is no more chance to get one’s name on Perseverance’s trip to the planet, those interested in sending their names to Mars on another mission can sign up through this page.

All submitted names will be reviewed and approved by the agency before they are etched onto a microchip, which will be placed aboard a spacecraft bound for Mars in the future.

Along with getting one’s name etched onto a microchip, each person that signs up will receive a boarding pass similar to a regular airline flight.

NASA explained that there is currently no spacecraft that is set to take the next batch of names to Mars. However, upon submitting your name, the boarding pass states that the next launch to Mars is scheduled for July 2026. 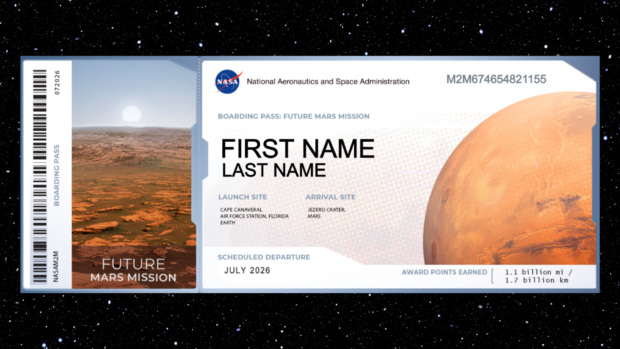 A sample of the boarding pass to send your name to Mars (Image: NASA)

Over 1.1 million people have already submitted their names for a future Mars mission, as of this writing.

Prior to this latest call for names, NASA had opened similar opportunities to the public as well. In 2017, the agency sent more than 2 million names to Mars via the InSight lander.  /ra