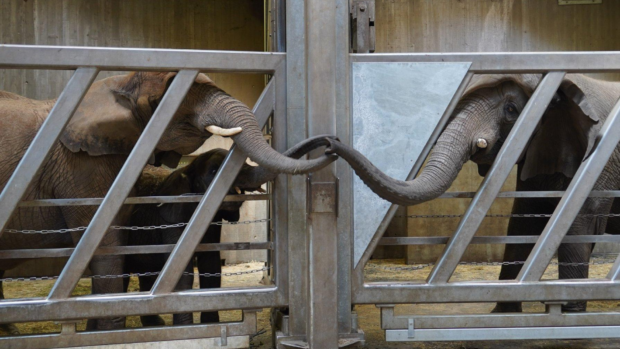 Pori, right, touches trunks with her daughter Tana and one of her granddaughters for the first time in 12 years. Image: Facebook/Zoo Halle

A 39-year-old elephant has finally reunited with her daughter after spending 12 years away from each other.

The reunion took place when the elderly elephant, Pori, was returned to her former home, the Bergzoo, in Halle, Germany, last Friday, Aug. 21.

Pori also met her granddaughters Tamika, 4, and Elani, 1, for the first time, as per Daily Mail on Aug. 24.

Upon arrival at the zoo, Pori was placed in a closed area beside her 19-year-old daughter Tana and one of her grandchildren. Though they were kept in different enclosures, they touched trunks for the first time in years, as seen in the zoo’s Facebook post.

The animal center has decided to keep the elephant house closed, for now, to give the animals time to reacquaint with each other. However, visitors may still view the elephants in their outdoor area.

Days after her arrival, Pori was finally allowed to join Tana and her grandkids in the shared area of their habitat. The animal center posted a video of the encounter on its Facebook page and noted that it was a joyful event for the four elephants.

Pori was born wild in Zimbabwe back in 1981 and was brought to the Magdeburg Zoo in Germany in 1983, as per report. She was then transferred to Tierpark in Berlin in 1997 for breeding purposes.  She gave birth to Tana in 2001.

Meanwhile, Bergzoo’s director, Dr. Dennis Muller, stated that Pori’s return is an “important step” in elephant care since daughters naturally stay with their mothers for life in the wild.

“In the future, all elephant herds in European zoos should be cared for in such natural family structures,” he was quoted as saying. “Today we have come a great deal closer to this goal.” Ryan Arcadio /ra