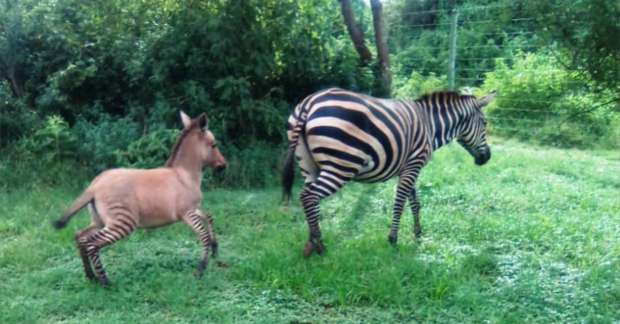 The “zonkey” and its mother zebra. Image: Sheldrick Wildlife Trust

A zebra gave birth to a rare zebra-donkey hybrid called a “zonkey” in a national park in Kenya, East Africa.

The conservation group Sheldrick Wildlife Trust announced the foal’s birth at the Chyulu National Park in a statement on April 8.

Team members from the organization first spotted the zebra with her baby earlier this year but was unable to get a proper look until weeks later. Upon getting a closer glance at the baby animal, the team was finally able to confirm that it was a zebra-donkey hybrid.

“While zebra foals are born with white and brown stripes that eventually turn black, this little one’s body was suspiciously light on stripes and overwhelmingly tawny in color,” the organization explained.

“At first, we thought that it had just been wallowing in the mud bath, but then the truth dawned on us: our wayward zebra had given birth to a zonkey!” they added. 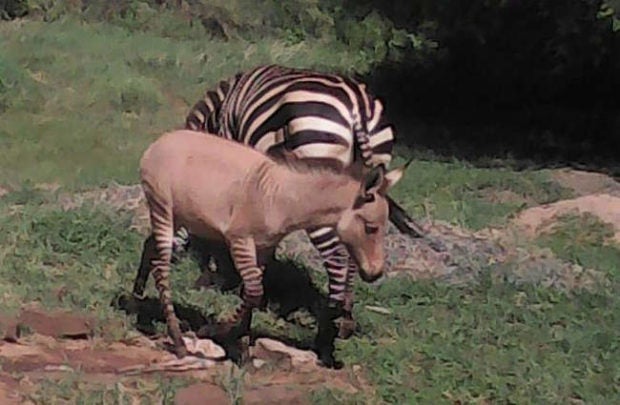 The “zonkey” and its mother zebra. Image: Sheldrick Wildlife Trust

The group also pointed out that a “zonkey” is a “highly unusual” hybrid between a zebra and a donkey. Since the gestation period of a zebra is 12 months, the organization said that it “obviously [become] acquainted with an amorous donkey” in the past year before it was transported to its current home.

The zebra had initially lived in a community bordering another wildlife center, the Tsavo East National Park, before moving to the Chyulu National Park.

“The zonkey combines the sturdy body of its donkey sire and the striped legs of its zebra mother, which makes for a striking creature,” the group explained. “While it should otherwise lead a normal life, zonkeys are mules, meaning that it will be unable to successfully breed once it reaches maturity.”

The organization said that the mother and her baby are “thriving,” and will be released into the wild once they are discovered by other wild zebras. JB