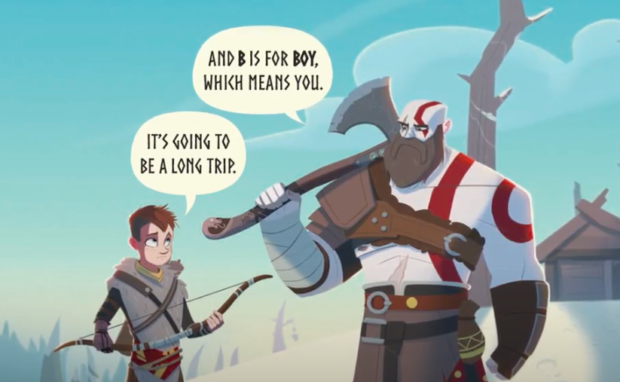 Kratos (right) teaches his boy Atreus (left) the ABCs of the nine realms in “B Is For Boy”. Image: screengrab from YouTube/Insider Editions

A new book based on the critically acclaimed “God of War” PlayStation franchise, specifically on Kratos’ latest adventure, is set to be released next week.

Fans of the games will be having the chance to relive the 2018 Game of the Year titleholder through the aptly titled book adaptation “B Is For Boy”.

Set to roll out on Sept. 1, the book will be a satirical retelling of the journey of the father-and-son duo Kratos and Atreus throughout the different realms of Norse mythology — although in a lot more child-friendly way.

“B Is For Boy”, written by Andrea Robinson and illustrated by Romina Tempest, is available for pre-order on several retailers and is currently priced at $15.29 (around P740) on Amazon.

In a teaser uploaded by publisher Insider Editions on July 6 via YouTube, an adorable-looking cartoon Kratos teaches his boy the alphabet by wittily using words from the “God of War” universe.

“In this humorous take on Sony Interactive Entertainment’s God of War franchise, Kratos teaches his son Atreus the ABC’s of the nine realms, including lessons learned from Kratos’s past mistakes,” the publisher said of the book.

“Kratos fills the book’s pages with the essential vocabulary from the world of the game, imparting his questionable (at times) wisdom in an irreverent and entertaining style,” Insider Editions added.

“B Is For Boy”, although described as a storybook for adults by its publisher, is said to be kid-friendly “for the most part,” according to Tempest in an interview with gaming website Polygon on July 6.

In other parts of the book, however, Tempest said that “You may have to cover your kid’s eyes in one or two places to guarantee a completely kid-friendly experience.”

This is not the first book adaptation based on the fictional Spartan-turned-God-of-War, as both the first and second installations of the franchise also received novelizations by author Robert Vardeman.

Other than “B Is For Boy”, author J.M Balrog had already adapted the latest “God of War” game into a book titled “God of War – The Official Novelization”, which came out also in 2018.

The said game has been hailed for having the best narrative, music, game direction and performance, among other categories, on top of bagging the 2018 Game of the Year Award. JB

Toph Beifong to get own ‘Avatar’ graphic novel in 2021

Release of next Halo video game pushed back to 2021