Are science and religion incompatible? Not for a panel of Muslims, Buddhists and Hindus | Inquirer Technology
Close
menu
search 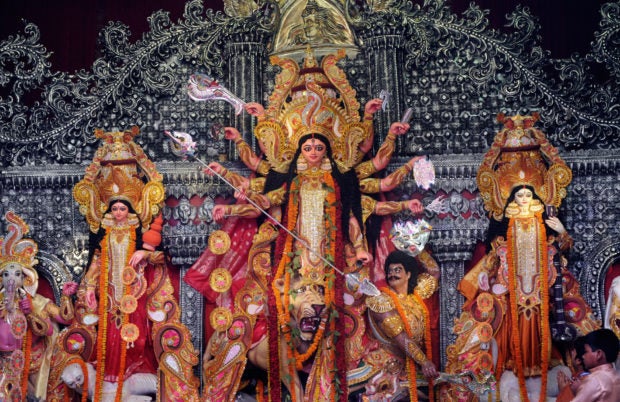 Indian Hindu priests worship in front of idols of Goddess Durga during the Durga pooja festival in New Delhi on Oct. 15, 2010. Image: AFP/Raveendran via AFP Relaxnews

While researchers have long been examining whether science and religion are at odds with each other through a Christian lens, a new survey investigates the relationship between these issues with a small group of Muslims, Hindus and Buddhists.

For this qualitative analysis, the Pew Research Center conducted 72 in-depth interviews with Muslims, Hindus and Buddhists in Malaysia and Singapore, with all participants saying that their religion was “very” or “somewhat” important to their lives.

These discussions provide insight into the different ways that people in each group described their perspectives on the relationship between science and religion.

For instance, the Muslims interviewed tended to speak of an overlap between their religion and science, often pointing out the fact that the Quran contains many elements of science, while “acknowledging some areas of friction.”

While many Hindus similarly state that their religion contains elements of science, they take a different tack than Muslim respondents and describe science and religion as overlapping spheres.

Hinduism has often identified concepts that were later illuminated by science, such as the antimicrobial properties of copper or the health benefits of turmeric.

Meanwhile, Buddhist interviewees generally describe religion and science as two separate and unrelated spheres, which “cannot be in conflict, because they are different or parallel realms.”

Despite these differences, interviewees from all three groups raised concerns about scientific research that interferes with nature in some way or that causes harm to animals.

When asked about potential areas of scientific research that should be “off-limits” from a religious perspective, Muslim, Hindu and Buddhist respondents talked about the need to consider animal welfare in scientific methods such as cloning and gene editing.

“Views of gene editing and cloning were more wide-ranging, with no particular patterns associated with the religious affiliation of the interviewees,” researchers of the Pew Research Center commented.

They also noted that not all aspects of science are seen through a religious lens, with Muslim, Hindu and Buddhist interviewees all describing government investment in science as “a way to encourage economic development while also improving the lives of everyday people.” IB