Should you think twice about picking a ‘diet’ pack of potato chips? 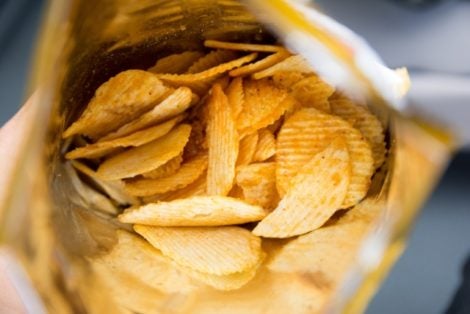 Chronic dieters tend to pick a bigger bag of ‘light’ chips than a smaller package of the regular product, although the lower-calorie version is perceived as less tasty. Image: Shutterstock/Akarat Thongsatid

Most dieters tend to cut calories in order to lose weight,  leading manufacturers to come up with various lower-calorie substitutes of our favorite high-fat food.

A recent study published in the Journal of Marketing Research examined the perceptions behind these “diet” options and how we make our food choices, particularly when it comes to restrained eating.

The research found that people who frequently try to cut back on their eating tend to buy a large portion of a “light” substitute of high-calorie food, rather than a smaller package of their favorite indulgent foods.

Participants who indicated that they rarely dieted had the opposite preference, systematically picking out a smaller portion of high-calorie food like potato chips and candy.

These findings prompted researchers to conclude that a larger, “lighter” version of an indulgent food is perceived as healthier and more filling than the smaller, higher-caloric-density version of the same product.

Researchers have conducted a series of studies to assess how dietary restraint affects the trade-off between caloric density and portion size for consumers.

In one of them, participants were asked to choose between a medium-sized bag of Lay’s baked low-fat BBQ potato chips and a smaller package of the regular version, both of which have similar total calories.

Most chronic dieters, who often cut back on their eating by skipping meals or eating smaller servings, opted for the larger bag of “light” baked chips, while unrestrained eaters preferred the smaller package of regular Lays BBQ chips.

Similar experiences were conducted with other high-calorie snacks such as popcorn, cookies, macaroni and cheese, and mayonnaise — all of which produced similar results.

Additionally, researchers noticed that “the larger but lower-caloric-density option was perceived as healthier and more filling, but less tasty than the smaller but higher caloric density option.”

Researchers have long been studying the impact of packaged low-fat snacks on normal-weight and overweight people.

A study, conducted in 2006 by researchers at Cornell University, showed that overweight people consume up to 50% more calories when they eat “diet” versions of snack foods than when they eat the regular versions.

At the time, researchers also found that many low-fat-labeled foods have only about 30% fewer calories than their regular counterparts.

“Low-fat labels trick people into eating more than regular labels. But the cruel twist is that these labels have an even more dramatic impact on those who are overweight. They are at danger for really overindulging when they see something with a low-fat label. If we are looking for an excuse to eat, low-fat labels give it to us,” said Brian Wansink, the John S. Dyson professor of marketing and applied economics at Cornell. CC