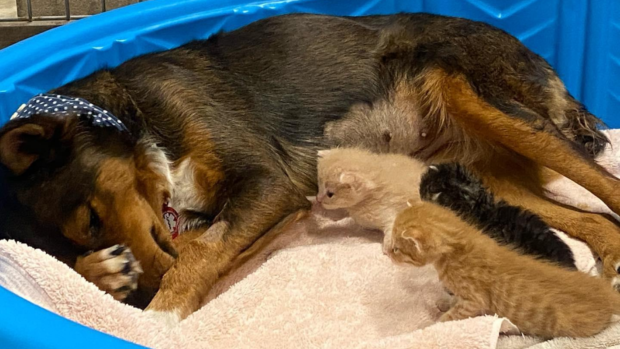 A rescue dog who lost her puppies shortly after giving birth is now caring for three orphaned kittens as her own.

The mother was found by a rescue group in a gas station in Arizona, USA, as per ABC-affiliate KNXV on Aug. 25.

Shortly after taking in the dog, which they named Georgia, the group realized that she was pregnant. However, she ended up giving birth prematurely and none of her puppies survived.

The organization’s founder, Anita Osa, noted that Georgia was heartbroken upon losing her babies.

“I’ve never had a mom dog lose a whole litter before. The best way I could describe it was she was frantic,” she said in the report.

“It was so sad, she was looking for those babies,” Osa added. “She tore up the toddler mattress we had her on, trying to find her babies.”

Since Georgia is still producing milk after the birth, Osa began looking for animals in need of a lactating mother. Osa eventually found three newly orphaned kittens that needed a mom.

Though she was unsure if Georgia would accept kittens as her babies, the animals quickly formed a bond together.

Osa explained that she introduced the kittens to Georgia gently by letting her sniff one of the babies first. Once Georgia seemed to accept the first kitten, Osa introduced the two others.

“It’s amazing to see how she instantly calmed down,” she was quoted as saying.

Osa also believes that the kittens do not know that Georgia is a dog. While Georgia does not produce a lot of milk as she gave birth prematurely, she still lets the kittens nurse on her.

“She cleans them and everything but the bond is strong,” Osa pointed out. “It’s really something to see, she protects those kittens just as if they were her babies.”

Georgia and the kittens continue to recover at the Sunshine Dog Rescue center, as per ABC-affiliate KVUE. The four have already been adopted by separate people and will live with their new owners after healing. Ryan Arcadio /ra