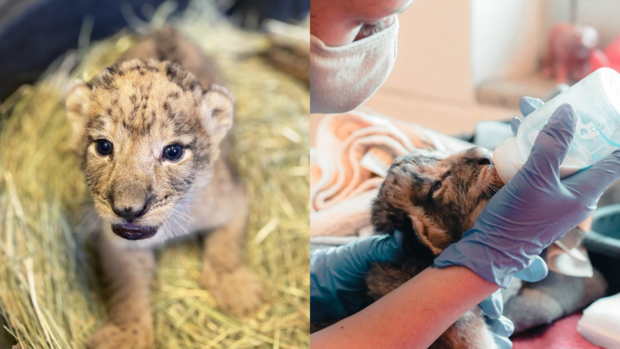 An African lioness gave birth to three cubs at the Dallas Zoo in Texas in the United States last month, marking the first litter of lions the center has welcomed in 46 years.

The babies—one male and two females—were born to a lioness named Bahati on Aug. 17 via Caesarean section.

The zoo posted photos of the three cubs on its Facebook page last Tuesday, Sept. 8. The center’s zoologists have named them according to their personalities and “unique circumstance.”

THE BEST NEWS YOU’LL SEE ALL DAY: We are overjoyed to share that our “baby” Bahati now has babies of her own! For the…

“The first cub, a male, will be called Izwi (IS-we), which means ‘vocal’ in the Shona language of Zimbabwe,” it said. “Izwi came into this world with a strong personality and a lot to say!”

“The second cub has been named Ilola (ee-LOH-la), meaning ‘to become strong’ in the Sesotho language of South Africa,” the zoo said.

It explained that Ilola had to undergo weeks of physical therapy to address developmental issues in her legs. The zoo did not detail the specific problems, but described her recovery as an “incredible story,” which they will explain in the future.

Meanwhile, the third cub will be called Tadala (ta-DAH-la). The word means “we have been blessed” in the southeast African Chewa language.

The zoologists came up with the name since they were unaware of a third cub during the initial ultrasounds and were thrilled to eventually see Tadala.

Bahati and her children will be kept “behind the scenes” in their den for a few weeks as they continue to grow and bond with one another. Once they are ready, the cubs will be introduced to the public and their father Kijani, aunt Jasiri and grandmother Lina.  /ra

TOPICS: babies, Dallas, lioness, lions, Texas
Read Next
Solar-powered handheld console could be played infinitely
EDITORS' PICK
Garcia softens stance, meets IATF halfway on swab-upon-arrival policy
Want to help local farmers? Shop small and eat Real Food
ICC is everything but a court of ‘white people’
Manila is 78th most expensive city in the world for foreign workers
TeaM Energy pushes development programs to help in pandemic rebound
Piolo Pascual: The Ultimate Heartthrob continues to level up
MOST READ
Sharon Cuneta on living in the US: ‘Nagagawa ko lahat ng normal na bagay’
Mike Nieto asks fans: ‘No below the belt remarks’ toward South Korea
Duterte-Duterte tandem possible but ‘winnability is another question’ — Binay
ICC is everything but a court of ‘white people’
Don't miss out on the latest news and information.