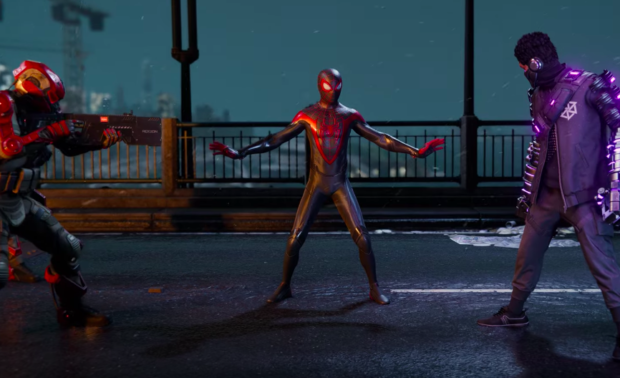 Sony has treated fans to a look inside the highly anticipated sequel spin-off to 2018’s hit triple-A game “Marvel’s Spider-Man,” which is set to be released alongside the PlayStation 5 (PS5).

During Sony’s PS5 Showcase event earlier today, Sept. 17, the gaming giant revealed the prices for the next-generation console and its upcoming titles.

One of the most-awaited games, unsurprisingly, is Insomniac’s “Marvel’s Spider-Man: Miles Morales,” of which a seven-minute gameplay demo was revealed during the showcase.

After being teased at the end of the first “Spider-Man,” gamers will now finally be playing as Miles Morales as he becomes the friendly neighborhood web-slinger of Harlem. The game is set a year after the events of the first one.

The demo starts with Miles and his best friend Ganke Lee walking through East Harlem to an election rally for Miles’ mother, Rio Morales.

In a blog for PlayStation published alongside Sony’s event, Insomniac’s community director, James Stevenson, notes that they went for a neon-noir aesthetic for the game, which is already evident just a few seconds into the demo.

Even before the action starts, the demo was able to show off the outstanding gameplay graphics including gorgeous ray tracing, fit for the PS5.

A war between Roxxon, a devious energy corporation, and the Underground, a high-tech criminal army, then breaks out, sending the rally into chaos. Miles then suits up and tries to save New York citizens while fighting off the new villain, the Underground’s leader called the Tinkerer.

The Underground was attempting to steal NuForm energy canisters from a Roxxon convoy, which led the fight into the Braithwaite Bridge, resulting in its destruction. The demo shows Miles head to the bridge and take on Underground goons with his new bio-electric venom and camouflage abilities.

“Marvel’s Spider-Man: Miles Morales” will be released both physically and digitally on Nov. 12, the same day as the PS5’s. The game will also be available for PS4 users, although they will not be able to experience upgrades and features only fit for the PS5.  /ra

‘Animal Crossing’, ‘Call of Duty’, ‘FIFA’… Which video game gets your blood boiling most?