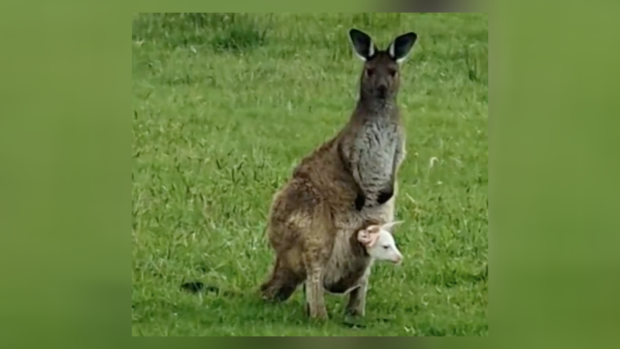 The grey kangaroo and its albino joey. Image: Instagram/@panoramagardenestate

A grey kangaroo has given birth to a pure white baby after mating with an albino male in the Mornington Peninsula, Australia.

The joey was born at the Panorama Garden Estates last month, as per the Daily Mail yesterday, Sept. 22. The owner of the kangaroos, Annemaree Van Rooy, only noticed the snow-white baby when it peeked out of its mother’s pouch.

The wildlife center also posted a short video of the baby in its mother’s pouch on its Instagram page last week. In the video, the joey’s albino father also makes a brief appearance.

Our beautiful eastern grey kangaroo and her white joey with a special guest appearance from little mate.

Albinism occurs when an animal inherits one or more mutated genes from its parents that interfere with the body’s production of melanin, according to National Geographic.

Though it is a rare genetic mutation, the wildlife sanctuary currently houses “a mob” of white kangaroos. Van Rooy stated that they welcomed their first albino kangaroo eight years ago from Border Town.

“There are about nine in the mob now, a combination of white and albino,” she said in the report. “They are quite rare and very distinctive.”

Van Rooy added that they have not named the baby yet “as it only popped its head out a couple of weeks ago.”

“She’ll be popping out hopefully in the next month for short periods of time and it will gradually get longer and longer,” she told UNILAD on the same day.

The owner also assures that the kangaroo and the mob will “live as they would in the wild” while in the sanctuary.

Van Rooy owns Panorama Garden Estate with her husband Nick, as per report. However, they have not opened to the public recently due to COVID-19 restrictions in the country. Ryan Arcadio/JB