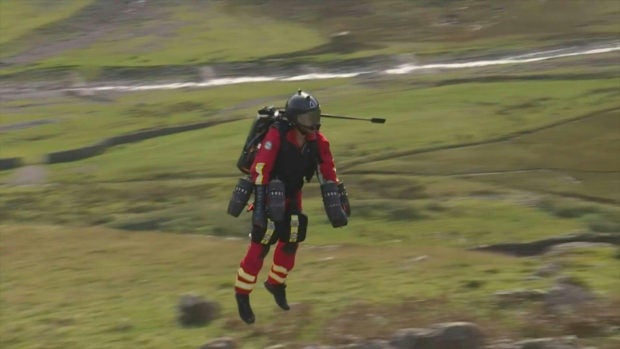 Richard Browning, wearing a helmet, goggles and red flight suit equipped with a jet pack-style device, zooming through the air just above the surface of a rocky terrain. Image: AFP/Ben Kenobi

Emergency responders and engineers in Britain said on Tuesday they have successfully tested “the world’s first jet suit paramedic”, which could transform how life-savers reach isolated casualty sites.

The trial saw Richard Browning, the founder of Gravity Industries which has pioneered the technology, fly from the bottom of a valley up to a simulated casualty site in 90 seconds — compared to a 25-minute response time on foot.

Video of the simulated exercise shows Browning, wearing a helmet, goggles and red flight suit equipped with a jet pack-style device, powering off the ground and zooming through the air just above the surface of the rocky terrain.

Andy Mawson, GNAAS director of operations, said the charity chose the test location based on its call-out data and had little idea how the tech would fare in the real world.

“We’ve seen it now and it is, quite honestly, awesome,” he said in a statement.

Mawson added that at a time of strained healthcare provision because of the coronavirus pandemic, it was “important to still push the boundaries”.

“We think this technology could enable our team to reach some patients much quicker than ever before,” he said.

“In many cases this would ease the patient’s suffering. In some cases, it would save their lives.”

GNAAS, which responds to more than 1,500 call-outs a year and relies on donations to fund its operations, said the successful test flight was the culmination of a year of discussion with Gravity Industries.

The charity was “now exploring the next steps in this collaboration,” it said.

Browning said it was “wonderful” to have tested his “Gravity Jet Suit” with active emergency responders.

“We are just scratching the surface in terms of what is possible to achieve with our technology,” he added. “Emergency response is one of the areas Gravity (Industries) are actively pursuing.” IB

We may soon be eating sushi made with lab-grown fish