Who wants to be a mobile game millionaire? 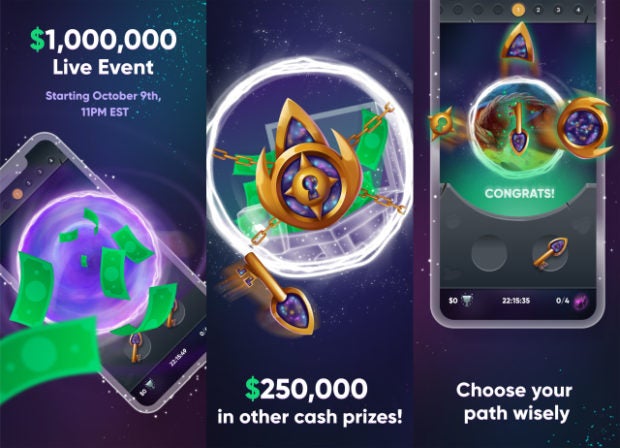 The Press Play Slots app has a $1.25 million giveaway (around P60.5 million) in store for its U.S. users. Image: Savvy Apps via AFP Relaxnews.

Ever dreamed of being a millionaire? In the United States, a mobile game is offering players the opportunity to win over a million dollars in prizes in a live event starting Oct. 9. One lucky winner will take home a $1 million jackpot (around P48.4 million) if they succeed in unlocking 25 portals on their first attempt. For everyone else, there’s an additional $250,000 (about P12.1 million) up for grabs in other prizes.

The American app Press Play Slots — a kind of virtual casino — has a very special competition coming up. From Friday, Oct. 9 at 10 p.m. EST, users will be able to try their hand at the “Portals” game for a chance to win a $1 million cash prize.

More prizes up for grabs

The aim of the game is simple. At each level, players have a choice of two keys to open a portal. The right key opens the door to a new world, while the wrong key takes players back to the beginning. The contest features 25 portals to unlock. The first player to unlock all 25 correctly on their first attempt will bag the top prize of $1 million.

While the Press Play Slots app is free to download, it is only available to U.S. residents age 18 and over, except for those in Washington, as outlined on the game’s App Store page.

“We are flipping the script on traditional, hyper casual games,” one of the game’s founders and investors told Forbes anonymously. “We don’t ask for any money from our users ever and there are no in-app purchases.”

The founder hopes to draw new players with the event, assuming that some of those who download the game for the competition decide to keep using the application. In a bid to reach as many people as possible, Forbes reported that YouTuber David Dobrik is set to hype the event to his 18.4 million followers. CC

Zynga out to cast spell with Harry Potter mobile game

Gordon furious: What? Gov’t allows 35-yr-old Chinese to stay in PH as retirees?