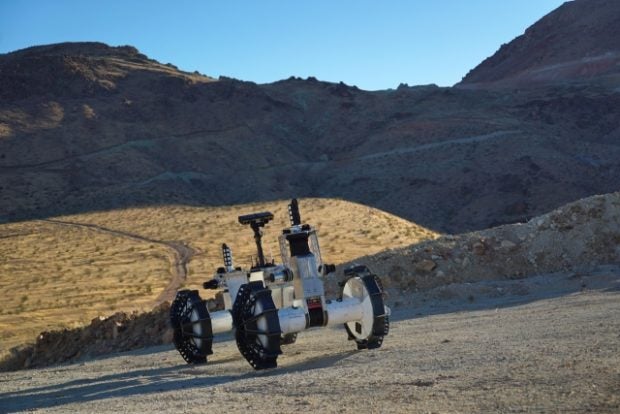 The DuAxel rover being tested in the California desert. Image: NASA via AFP Relaxnews.

NASA has presented a new rover called DuAxel, designed to contend with all kinds of extraterrestrial terrain. The rover, which can split into two separate parts, is designed with planetary exploration in mind to help investigate otherwise inaccessible terrain. It was recently tested in the rocky conditions of the Mojave Desert in Southern California and could one day find use on the Moon, on Mars or beyond.

The distinctive feature of DuAxel, as its name suggests, is it comprises two two-wheeled rovers, one of which can split off to explore particularly difficult-to-access locations. This flexible design was built with extreme terrain, like craters and rock faces in mind, whether on Mars or beyond.

In theory, DuAxel should be able to adapt to cover all kinds of terrain. The removable single-axel rover can continue its journey alone while tethered to the other part, which remains anchored in place. The two-wheeler could, for example, head out solo to a hard-to-reach location to observe, collect samples or directly analyze various parts of the rocks or soil, before returning and reattaching itself to its other half, all while avoiding obstacles in its path.

Previous planetary exploration rovers developed by NASA were not able to travel over slopes steeper than a 30-degree incline.

This latest rover is the result of almost 30 years of research and development. It has already been put through extensive testing in the California desert before potentially being deployed to other destinations. CC

NASA announces plans to study the cosmos with high-flying balloon