Realme, the No. 2 smartphone brand in the country, launches a powerful gaming smartphone in the Philippines ideal for aspiring Filipino youth
INQUIRER.net BrandRoom / 09:00 AM November 07, 2020

The time has come for the current generation of mobile gamers to literally “Feel The Power” as realme Philippines introduces its latest smartphone dedicated to gaming—the realme narzo 20—the first smartphone for Php7,990 to feature the powerful Helio G85 gaming processor, 48 MP AI triple camera, massive battery at 6000mAh and 18 W Quick Charge.

Now with its latest smartphone realme narzo 20, the No. 2 smartphone brand in the country is conquering yet another market—that of the mobile gamers, which undeniably is a rising sector. One study said that there are 1.36 billion mobile gamers worldwide in 2019 and the number is predicted to grow exponentially in the next coming years. Practically, every one weaned on gadgets, who are the young generation of today, rely on their smartphones for entertainment, videos and games.

Mobile gamers will definitely feel the gaming power in their hands once they get to experience realme narzo 20’s superb capability as the smartphone is impressively equipped with the powerful MediaTek Helio G85 processor.

This processor features octa-cores clocked at up to 2.0GHz and is paired with a powerful ARM Mali-G52 GPU that makes narzo 20 the perfect gaming companion of every mobile gamer. As a processor for gaming, Helio G85 reaches 200,000+ in Antutu Benchmark, providing sufficient power for smooth and exceptional gaming experience.

realme is known for its powerful and great looking smartphones. In the looks department realme narzo 20 doesn’t disappoint either. Focusing on the design, realme narzo 20’s design is inspired by Victory gesture, with a backside possessing a premium touch and feel, including a visual effect that changes with light, which is achieved with use of special texturing techniques.

As a gaming smartphone, it provides a bigger screen at 6.5-inch with 20:9 screen ratio, which is almost a near-full screen. The larger field of view, provides excellent game, audio and video experience.

realme narzo 20’s mega battery allows users to enjoy their games almost non-stop. With its 6000 mAh battery, the realme narzo 20 could last for 45 days in standby mode, according to realme testing lab. It’s even far better than some flagships. With special OTG reverse charge, the smartphone can also become your battery life saver. And it takes only 30 minutes to charge to 29% with its 18W fast charge feature.

This gaming smartphone is also efficient at consuming battery. Features like App Quick Freeze, Screen Battery Optimization are applied in realme narzo 20 to make sure the battery usage of apps are optimized for increased battery endurance. If you need longer battery life, you can enable power saving mode, which will lower the screen brightness, shorten auto sreen-off time, and disable background sync to lengthen battery life. And the super power saving mode could even further increase battery life but without compromise on daily user experience.

For a smartphone whose price won’t drain your wallet, realme narzo 20 already features a quad camera setup, making it stand out from competition in its segment. A 48MP sensor, f/1.8 large aperture, and 6P lens constitutes the main camera, plus a wide-angle camera with pixel of 8MP, aperture of f/2.25 and 119° ultra- wide-angle field of view for capturing wide shots.

Switching to the ultra-wide-angle mode is done with just one click, making it easy to capture in full detail photos of landscapes, buildings, multi-person group photos and other far scenes. Plus, the distortion calibration algorithm feature solves detail distortions in traditional ultra- wide-angle photos.

realme narzo 20’ camera features also include ultra macro lens for capturing small details at up to 4 cm shooting range; nightscape mode, which allows you to take clear and brighter photos of subjects or sceneries even at night; and an 8MP selfie camera that can take crystal clear selfies. The front camera also supports AI beautification function, HDR mode, portrait mode and a Panoselfie feature that can help you take wider selfies.

realme narzo 20 features the realme UI based on Android 10 and ColorOS 7. Closer to stock Android experience, realme narzo 20’s UI is seamless, simple, fun to use, and less complicated. This a UI the young consumers would really love as they can also  customize it for one’s personal taste.  The icon customization function allows users to not only change the shape and size of the icons, but can change the internal graphic size of the icons.

realme UI also brings in 11 new wallpapers inspired by natural elements which are indeed a perfect match for its color scheme. 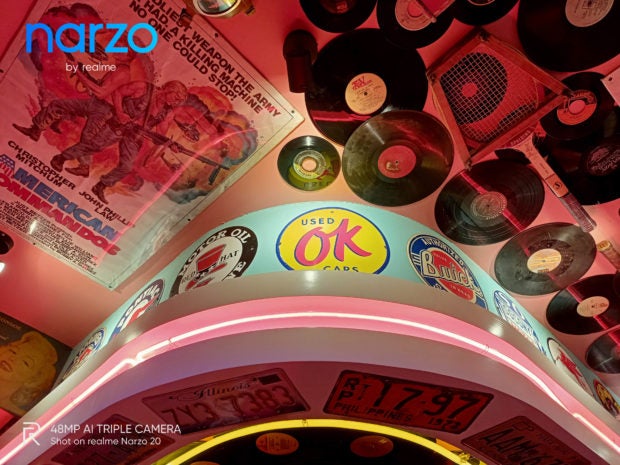 A ton of features

The young generation of users would also love realme narzo 20’s “Focus Mode”. It can help users isolate themselves from the outside world, and the system will simultaneously play some relaxing music. Taking a partial or selected screenshot is done easily by using three fingers, and pressing and holding your screen, then swiping to capture the selected part of the screen.

The built-in Dark Mode is optimized to work with more third-party apps. The app drawer background shifts from light to dark when the Dark Mode is turned on. It also enables you to set the Dark Mode to automatically turn off at sunrise and turn on at sunset.

Launched on November 5 in the Philippines, realme narzo 20, truly a superb gaming device with tons of features, retails for only Php 7,990. The variant launched locally is the 4+64 GB and it comes in Silver Sword and Blue Blade colors. It only will be primarily available at Lazada’s 11.11 sale on November 11, so better mark your calendars because you can enjoy as much as 42% discount on selected realme products.

As Christmas is just around the corner, realme will also introduce a lot of smartphones and AIoT promos during the Lazada and Shopee 11.11 sales to the delight of realme fans.