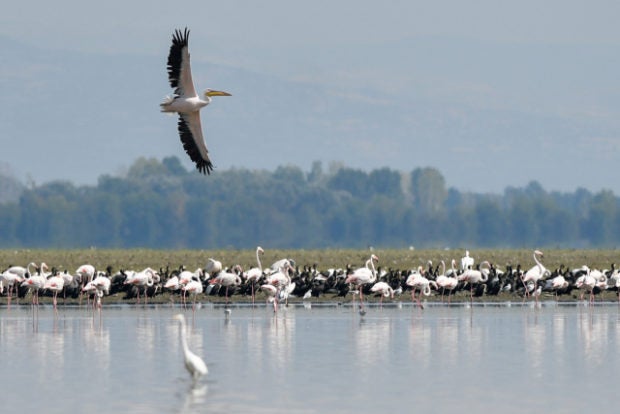 Flocks of pelicans and flamingos in the lake of Kerkini at the Greece and Bulgaria border. Image: AFP/Nikolay Doychinov

The population of most wild animals with a backbone — mammals, amphibians, birds, reptiles and fish — is stable, scientists said Wednesday in a finding sharply at odds with a benchmark report issued every two years by environmental group WWF.

Looking at 14,000 vertebrate populations monitored by WWF since 1970, researchers found that if the 1% suffering the worst declines are removed from the equation, the remaining populations, grouped together, are holding steady in terms of overall numbers.

In September, the WWF’s Living Planet Index reported an average 68% fall in the populations of all animals monitored, a grim figure that made headlines worldwide.

“Collapsing all population trends into a single value can give the impression that everything is declining,” Brian Leung, senior author of the new study and a professor at McGill University in Canada, told Agence France-Presse.

“However, the image of a global ‘biodiversity desert’ is not supported by the evidence.”

There are in fact regions where most species within certain groups are on a clear downward spiral, such as birds in the Asia-Pacific region and reptiles in the Americas.

But including them in an overall average can be misleading, Leung said.

“The Living Planet Index metric does not actually show that 68% of all populations have been lost,” he noted by email.

“Unfortunately, it is hard to not leave with that impression.”

Asked to comment on the report, WWF referred AFP to the Zoological Society of London (ZSL), which co-authors the flagship Living Planet reports.

ZSL scientist Robin Freeman, also a co-author of the new study, published in Nature, acknowledged in a blog post that “removing these clusters (of extreme decline) leave a distribution of population that appears, on average to be stable.”

‘Get the science right’

“However, this doesn’t mean that the remaining 99% of all populations in the Index are doing fine.”

Freeman proposed yet another way of calculating the data to make his point.

Setting aside 10% of the vertebrate populations at both extremes — those that have declined and increased the most — “still reveals a decline of 42% since 1970,” he said.

Leung was at pains to make clear that his findings do not suggest all is well in the animal kingdom.

“We are not arguing that there are no biodiversity problems, but rather that it is not all declining worldwide, nor hopeless,” he said, noting that in some areas — especially in temperature latitudes — animal populations are increasing.

Nor does his methodology apply to last year’s landmark report from the UN’s science advisory panel for biodiversity, known as IPBES, which concluded that one million species on Earth are at risk of extinction.

Leung said he was concerned that his study might breed complacency or be deliberately misread to discredit conservation efforts to date.

“Our primary motivation is to get the science right,” he said. “Over the long term, our field’s credibility depends on it.”

The fact that global populations of wild animals are more stable than thought should also be taken as an encouraging sign, he added.

“If everything is declining despite all of our efforts over the last few decades, this kind of continual negative messaging could cause despair and inaction,” he said.