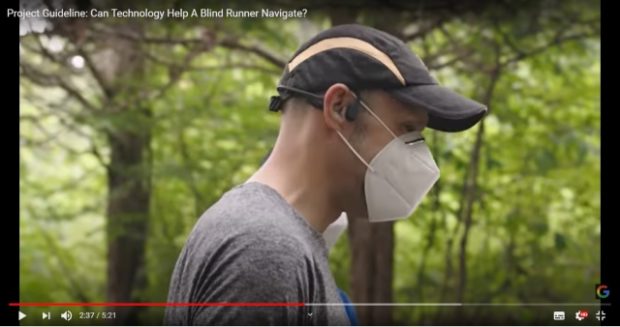 Google Research engineers are working on a project that aims to make it possible for people who are visually impaired to play sports and run outside safely. In partnership with Thomas Panek, the CEO of American guide dog training school Guiding Eyes for the Blind, the project consists of guiding those who are visually impaired by using the camera on their smartphone.

The Guideline project uses machine learning and requires a smartphone, headphones and a guideline painted on the ground in order to enable a user to follow a fixed itinerary.

For this to function, a yellow line has to be pre-painted on the path to follow. The runner is then equipped with a smartphone, placed around their waist. The smartphone’s camera approximates the user’s position and delivers audio feedback via headphones to help keep them on the guideline.

While this project is still in a test phase, and the artificial intelligence used has yet to deal with vagaries of the weather or obstacles that may crop up along the way, a first video posted by Google shows impressive results, empowering and freeing visually impaired walkers and runners.

In the future, this technology could go beyond sporting activities and be adapted to everyday outings. In the long run, it could also replace guide dogs, as long as communities implement painted guidelines and the users stick to following them. CC

Google rolls out Lookout, a Google Lens-like app for the visually impaired