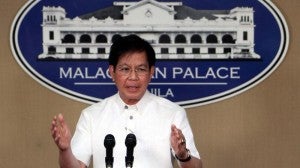 MANILA, Philippines — The national broadband program of the Department of Information and Communications Technology (DICT) would further increase to P12 billion if the Senate approves the realignment of funds from the Department of Public Works and Highways (DPWH).

This, as Senator Panfilo Lacson said he is proposing to cut the P666.4-billion budget of the DPWH by P63 billion, part of which will be used to augment the funding for the DICT’s national broadband program.

“Ang total nito (realignment) P63 billion to be realigned to other agencies like the DICT. Dinagdagan namin…kahit makumpleto ang P12 billion, still short of P6 billion from their original request of P18 billion,” Lacson said in an interview over ABS-CBN News Channel on Wednesday.

(The total realignment is P63 billion, to be realigned to other agencies like the DICT. We want to augment it (national broadband program) to up to P12 billion, still short of P6 billion from their original request of P18 billion.)

The original proposal of the DICT to complete the said program is P18 billion but the executive department only approved P902 million under the National Expenditure Program.

The national broadband program, however, got an augmentation of P2 billion under the House-approved General Appropriations Bill (GAB) and another P3 billion under the Senate finance committee report on the 2021 budget, Lacson said when he defended the budget of the DICT on the Senate plenary last Nov. 20.

“So there is now P5.9 billion for the National Broadband Program,” the senator had said.

The said program is the DICT’s blueprint for the acceleration of the deployment of fiber optic cables and wireless technologies for the overall improvement of the internet connection in the country.