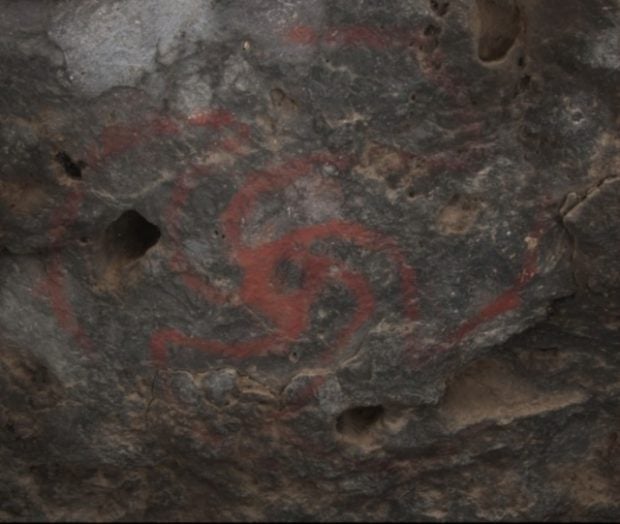 Researchers have long imagined a correlation between psychotropic substance and cave art but they did not have any substantial proof until recently.

A new study, published on the Proceedings of the National Academy of Sciences on Nov. 23, provides evidence that native Californian cave artists took hallucinogenic plants when creating rock paintings.

Archaeologists have long thought that native tribes were in the habit of eating Datura wrightii concoctions to enter a trance state during religious ceremonies. However, they had never managed to determine the origin of the abstract, even psychedelic images that these ancient cultures painted on cliff and cave walls.

For this research, an international team focused on a red swirling pattern drawn by natives in California’s Pinwheel Cave, north of Santa Barbara. This painting has been retouched over the years, proving its importance for communities living nearby. However, its meaning has remained a mystery, until recently.

The team of archaeologists claimed that this pattern represents a Datura flower opening its blooms at dusk and that groups of people probably organized ceremonies in the Pinwheel cave, where they ate the plant.

They found bundles of fibers known as quids inserted into the ceiling of the cave near the paintings. These fibers are over 400 years old. The team also found tools and artifacts on the ground site, which allowed the researchers to determine that people lived on this site between 1530 and 1890.

“Three-dimensional (3D) analyses of the quids indicate the quids were likely masticated and thus consumed in the cave under the paintings. Archaeological evidence and chronological dating shows the site was well utilized as a temporary residence for a range of activities from Late Prehistory through Colonial Periods. This indicates that Datura was ingested in the cave and that the rock painting represents the plant itself, serving to codify communal rituals involving this powerful entheogen,” read the study.

While the archeologists do not exactly know why this swirling drawing was painted in the Pinwheel cave, they take this illustration as evidence they consumed the flower as a group in this location, during initiation ceremonies or to prepare for hunting expeditions.

“The evidence at Pinwheel Cave shows that the hallucinogens were taken in a group context, and that the art communicated the ecology of the plant behind the trance rather than the images seen during the trance. So the art is all about codifying the experience of the effects that the plant creates for the cohesion of the whole society,” David Robinson, an archaeologist at the University of Central Lancashire and main author of the research paper, told The Art Newspaper. CC