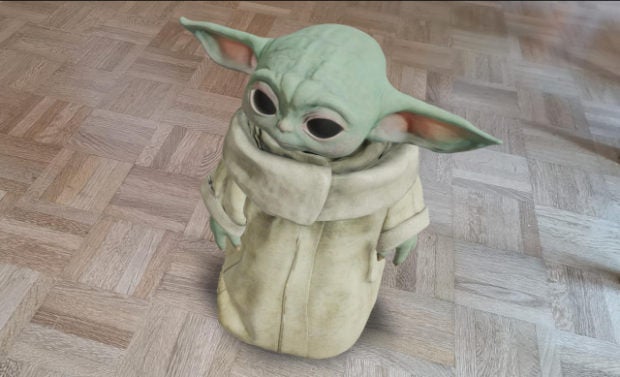 Grogu, aka “The Child,” is now available to view in augmented reality in your environment. Image: Courtesy of Google/David Bénard via AFP Relaxnews

Google has announced that Grogu — also known as The Child or Baby Yoda — is now available as a 3D object on Search. Plus, the star of the TV series, “The Mandalorian,” can be viewed in augmented reality in any environment by means of a smartphone. Grogu joins a growing list of objects and animals, as well as dinosaurs, available as 3D models.

To find Grogu, open Google on your smartphone and search for “Grogu,” “The Child,” “Baby Yoda” or even just “The Mandalorian,” then look for the “See the Child in your space” panel, select “View in 3D,” then “View in your space.” It is then possible to zoom in and out on the character while watching him blink his eyes and move his ears. Users are then free to move the character around or even take his picture, alone or with friends. The function is available on Google Search for Android and iOS.

“The Mandalorian” is the first live-action series in the Star Wars franchise. The story is set between the events of “Return of the Jedi” and “The Force Awakens.” It is available to watch on the Disney+ streaming service. RGA

Robredo: Can PH wait until 2023 to get back to normal?