US Space Force to call its members ‘Guardians’ 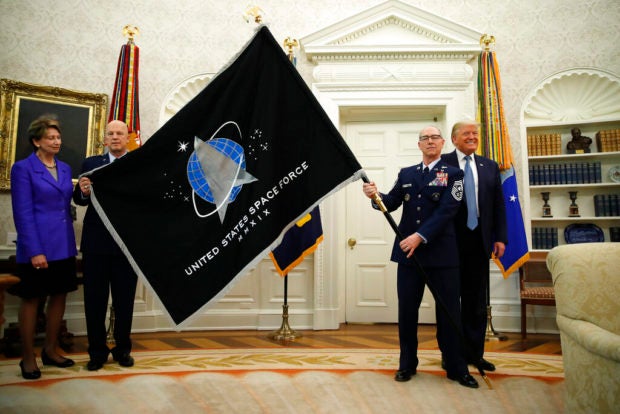 President Donald Trump stands as Chief of Space Operations as US Space Force Gen. John Raymond, second from left, and Chief Master Sgt. Roger Towberman, second from right, hold the US Space Force flag as it is presented in the Oval Office of the White House on May 15, 2020, in Washington. Secretary of the Air Force Barbara Barrett stands far left. Image: AP/Alex Brandon

In a move that appears straight out of a comic book, the United States Space Force revealed that it will be calling its members “Guardians.”

Incumbent US Vice President Mike Pence announced the decision during the first-anniversary celebration of the said military branch’s establishment, which was streamed on YouTube by the White House earlier today, Dec. 19.

“Soldiers, sailors, airmen, Marines and guardians will be defending our nation for generations to come,” Pence added.

The US Space Force, which was established last year on Dec. 20, currently has 2,200 members from the US Air Force. Another set of 3,600 cyber, intel, acquisition and engineering airmen have, meanwhile, been selected to transfer to the said branch, among others.

Pence said they are expecting to have a total of 6,000 members “in a short period of time.”

The US Space Force completed its first national security space launch mission, which was of the AEHF-6 satellite, last March.

Through Twitter earlier today, the US Space Force noted that “Guardians is a name with a long history in space operations, tracing back to the original command motto of Air Force Space Command in 1983, ‘Guardians of the High Frontier.'”

The name Guardians connects our proud heritage and culture to the important mission we execute 24/7, protecting the people and interest of the U.S. and its allies.

“The name Guardians connects our proud heritage and culture to the important mission we execute 24/7, protecting the people and interest of the U.S. and its allies,” it said in the following tweet.  /ra

PNP, PDEA: Raps will be filed vs those at fault in ‘botched’ drug bust