Oyster shells given new life as reefs off Texas coast 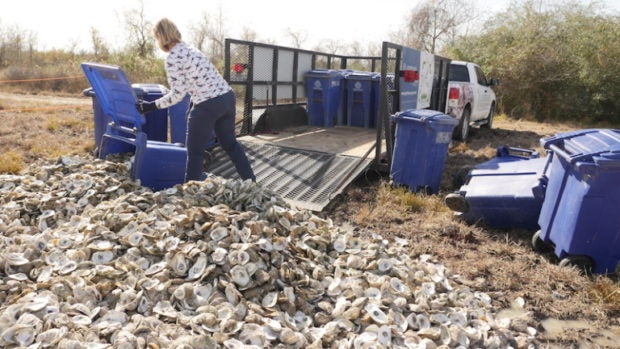 Shannon Batte unloads bins full of oyster shells at Red Bluff Road, a wasteland rented from the Port of Houston used as a curing site on Dec. 21, 2020 in Pasadena, Texas. Image: AFP/Francois Picard

On the terrace of a seafood restaurant in Houston, Texas’s largest city, a few ladies are enjoying a local oyster dish: the breaded mollusks are slathered in mayonnaise and served in a sandwich.

Sitting in the shade of a palm tree on a warm winter’s day, the diners have no idea that behind the restaurant a woman is busy giving the shells a second life.

Thanks to Shannon Batte, they will soon form part of a reef in Galveston Bay, 10 kilometers away. Out of sight, the Galveston Bay Foundation employee loads seven trash cans each weighing 80 kilograms on to her trailer.

The cans are full of not just oyster shells but also water, discarded oyster forks and squeezed lemons. All year round, on Mondays, Wednesdays and Fridays, she makes the rounds of the foundation’s partner restaurants.

“Most people like to enjoy their oysters in any month that has an ‘r’ in it,” said Batte. “So currently, right now, it’s December, so the oyster shell collection is a little more. But due to [COVID-19] there’s not quite as much shell as we’ve normally had in the past.”

“Our customers really want to know where do our oysters come from and what do you do with those shells,” said Tom Tollett, owner of Tommy’s Seafood Restaurant & Oyster Bar, quoted by the foundation. It was here that the first oyster shells were collected almost 10 years ago, in March 2011.

The program has grown since then to include some 10 restaurants.

Displayed on menus or tables, logos and diagrams show guests the fate of the thousands of shells collected: they will simply return to the waters where they were formed. New oysters will settle and develop on these shells.

A ‘coastline of life’

Galveston Bay is home to a seafood-rich ecosystem thanks to the brackish mixture of fresh water from rivers and salt water from the Gulf of Mexico.

In 1845, when Texas became a United States state, the town of Galveston already had its own oyster bar.

But in September 2008, Hurricane Ike, which killed 113 people in the U.S., destroyed more than half of the oysters’ habitat, smothering their reefs with sediment.

To rebuild the ecosystem, the shells are now dumped each spring on rocks placed at the bottom of the water. Where the current is stronger, the shells are piled into nets and erected as dams. This becomes a new habitat and by breaking the waves, also helps fight soil erosion.

“This is a method that we adapted from a sister organization in Florida, Tampa Bay Watch. It is used across the nation, particularly on the East and Gulf coasts,” said Haille Leija, who is in charge of habitat restoration at the foundation. “It allows for the establishment of a ‘living shoreline’ in contrast to hardened shoreline protection structures such as bulkheads.”

Once submerged, the shells are also perfect shelters for crabs, shrimp and small fish that will feed larger ones and contribute to the diversity of the environment.

Developing the oyster population also offers another advantage: each mollusk naturally filters up to 190 liters of water per day. But before taking a dip, Batte’s shells stop at what the foundation calls a “curing site” between Houston and the coast.

Batte, 33, empties her garbage cans in a field, removes the oyster forks and spreads the shells on the ground. Three months later, they will be turned over using a small backhoe, and then spend at least another three months in the fresh air.

This prolonged sun treatment in one of three dedicated sites sterilizes the shells by killing bacteria and parasites. The first flies arrive without delay and soon four wild boars are licking the shells and chomping on lemons.

“They are less and less scared. Sometimes they don’t wait until I am gone to feast,” she said. “I am careful because they can attack. Luckily I have an air horn to scare them off.” JB

TOPICS: Galveston Bay, oysters, Reefs, restaurants, Texas
Read Next
32-M customers benefiting from improved services in 80 provinces with network upgrades
EDITORS' PICK
Garcia softens stance, meets IATF halfway on swab-upon-arrival policy
Want to help local farmers? Shop small and eat Real Food
ICC is everything but a court of ‘white people’
Manila is 78th most expensive city in the world for foreign workers
TeaM Energy pushes development programs to help in pandemic rebound
Piolo Pascual: The Ultimate Heartthrob continues to level up
MOST READ
Sharon Cuneta on living in the US: ‘Nagagawa ko lahat ng normal na bagay’
ICC is everything but a court of ‘white people’
Duterte-Duterte tandem possible but ‘winnability is another question’ — Binay
Mike Nieto asks fans: ‘No below the belt remarks’ toward South Korea
Don't miss out on the latest news and information.