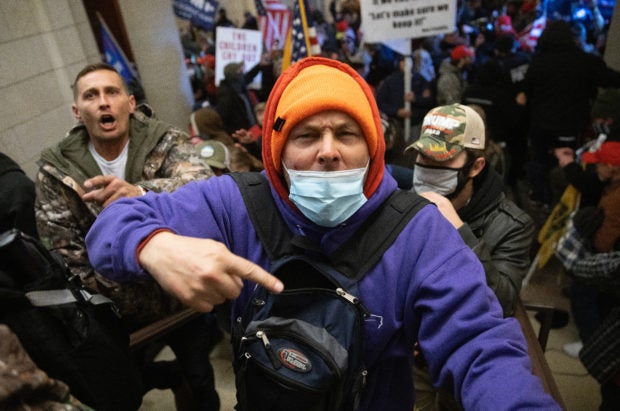 SAN FRANCISCO–Twitter on Wednesday began limiting the reach of tweets stoking an assault on the US Capitol by a mob intent on overturning the election results.

“We have been significantly restricting engagement with tweets labeled under our Civic Integrity Policy due to the risk of violence,” the Twitter support team said.

“This means these labeled tweets will not be able to be replied to, retweeted, or liked.”

Twitter and other social platforms were facing challenges amid the unrest after President Donald Trump, a fervent Twitter user, had rallied supporters in the capital city as Congress was set to certify the November election won by Joe Biden.

A Trump video clip posted atop his official Twitter account was tagged with a note saying the claim of voter fraud was disputed, and that the tweet could not be replied to, retweeted, or liked “due to a risk of violence.”

Facebook did not reply to a query whether the social network is taking any steps to stop from being used to praise or exacerbate the mayhem in DC.

A look at rival social network Parler showed posts lauding the mob assault on the Capitol.

“Disappointing. Pelosi, Schiff, Nadler, Schumer, Romney all got away. DC is a target rich environment,” read a post at an @Macholatte account.

“Hope to see some of the DemonRat residences getting torched.”

An account from the militia group Proud Boys at Parler posted a photo of a smiling man, apparently in the Capitol building, carrying a podium.

Another Parler post hurled insults at Vice President Mike Pence, including calling him a “traitor” for refusing to overturn the November election results.

Conservatives backing Trump have expanded their online platforms to include alternative social media sites which have refrained from filtering unverified claims.