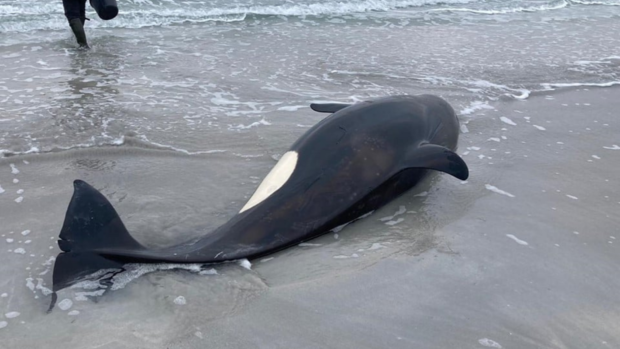 A group of divers helped an orca get back to sea after it had ended up on the shores of a beach in Orkney, Scotland.

Colin and Heather Headworth contacted the British Divers Marine Life Rescue when they spotted the stranded animal from their home on Jan. 5. The team’s medics soon approached the young animal, which they noted was in good condition.

The orca was lying on its side on the sand parallel to the sea, as seen in the group’s Facebook post on the same day.

“After putting out a shout to local residents for more manpower, the team immediately set about up-righting the animal to aid breathing and to ensure the blowhole was out the water,” the team explained. “As the tide came in and more water helped to lift the young animal, the Medics were able to rotate it to face the incoming sea and slowly move the new dolphin stretcher under the animal.”

Once it was in an upright position, the orca began lifting its head and showed that it could steady itself in the water. Around an hour later, the mammal swam off into the sea.

“It rolled a couple of times and then submerged and continued straight out away from the beach without looking back,” the divers added.

Though the team is confident the orca is already safe, they will monitor the coast in the coming days as a precaution.

Following the rescue, the group stated that it was a 3.4-meter-long male and was about 3 or 4 years old. While orcas are regularly spotted in the area, stranding is an “incredibly rare” incident.

The team also believes that this was the first successful rescue of an orca in the United Kingdom.  /ra

Toddler gets lost following pet dog into woods; both found safe after 1 day

Woman arrested for attempting to steal puppy worth $10,000