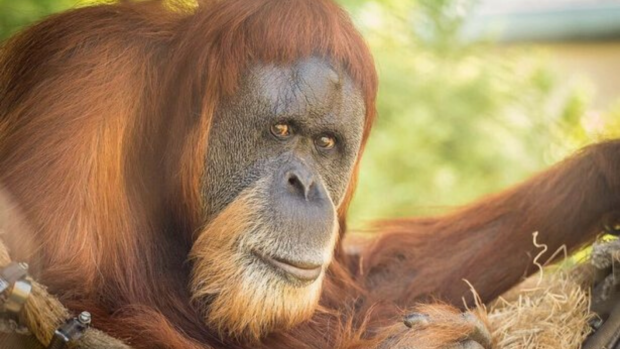 The world’s oldest known orangutan, Inji, was euthanized in Oregon Zoo in the United States at the age of 61.

The zoo’s team announced her passing in a statement on their website on Jan. 9 along with a short tribute to her.

Veterinary and care staff decided to put her down after her pain medications stopped bringing her relief. Inji’s health had deteriorated over the past few weeks, said Bob Lee, who oversees the facility’s animal areas.

“She was moving stiffly, rarely left her nest box, and was no longer interested in even her favorite foods,” the statement said.

The zoo also explained that orangutans seldom live past 40 years. However, Inji managed to reach her late 50s before her mental and physical capabilities began to slow down.

“She remained active and inquisitive all through her golden years. She seemed to study humans and enjoy watching them, especially children,” Lee noted.

“We knew she couldn’t live forever, but this really hurts, and I know many visitors are grieving along with us,” he added. “Inji’s ability to connect with people was incredible. She inspired generations.”

The zoo does not know Inji’s exact birthday, but estimates that she was born in the wild in Sumatra around 1960. She arrived at the center on Jan. 31, 1961, via the wild-animal trade, which was still legal at the time.

While the wild-animal trade is now illegal, Asaba Mukobi, the zoo’s senior primate keeper, warns that it still takes place.

“It is considered a major threat to orangutans’ survival, along with human encroachment and habitat loss from palm oil plantations,” he said.

The International Union for Conservation of Nature currently classifies all three species of orangutans—Sumatran, Bornean and Tapanuli—as critically endangered. /ra

Diego, the tortoise who saved his species from extinction, finally released to the wilds

Orangutan recovers after shot with 74 airgun pellets in Indonesia