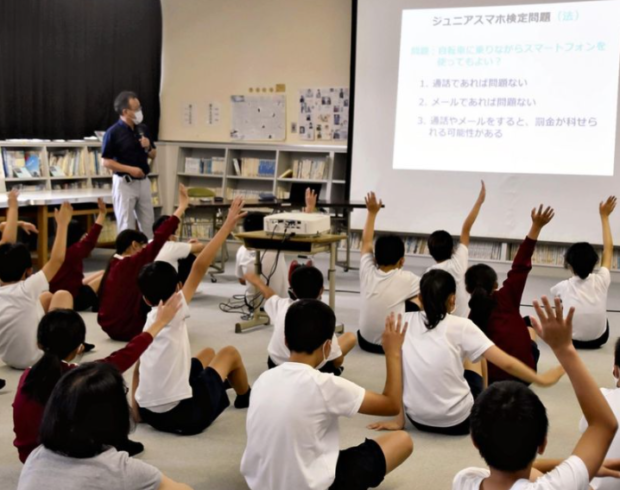 Elementary school students in Anan, Tokushima Prefecture, are taught how to safely use the internet on July 20. The Japan News/Asia News Network

OSAKA — Concerns over more people, especially children, becoming addicted to playing video games are growing, amid the ongoing calls to refrain from going out because of the novel coronavirus pandemic.

Addiction support organizations have received several consultations from parents, some even saying that their children are so addicted to video games that they stopped going to school.

Experts say it is important to make rules for playing games in the household. The government is also working to boost its efforts to prevent such addiction and is organizing a counseling system.

A 43-year-old homemaker in Osaka is worried her 6-year-old son is spending more time playing video games than before school had temporarily closed in spring of last year due to the pandemic. Until then, the first-grader in elementary school used to play games only when his brother, 13, was playing when friends came over.

These days, however, he plays every day with a handheld game console, which his older brother no longer uses, for one to three hours a day even after school resumed.

His mother has continued allowing her son to play games while keeping an eye on him as letting him play outside is still a concern due to the pandemic. In addition, he doesn’t play video games before going to school or after-school lessons, and diligently does his homework.

Nevertheless, she said, “It’s bothers me to think I may not be able to control how he uses a smartphone once he gets one in the future.”

Since the summer of last year, consultations from parents concerned over their children’s dependence on video games has almost doubled at MIRA-i, a service provided by a Tokyo-based company to support recovery from internet and video game addictions. The coronavirus pandemic is thought to have contributed to the sharp increase in consultations.

Problems related to online game billings have also increased, with the National Consumer Affairs Center of Japan receiving 4,544 consultations between April and December in 2020, or a 30% increase from the same period the previous year.

The average daily time spent on online games by 80 people ages 12 to 44 increased from 3.9 hours before the pandemic in February last year to 5.4 hours in May and June, according to a survey conducted by the National Hospital Organization Kurihama Medical and Addiction Center in Kanagawa Prefecture, which has an outpatient clinic specializing in video game and internet addiction. About half of the respondents said their symptoms of “withdrawing from society” and “having a sleep disorder” worsened.

A survey conducted in fiscal 2017 by a research group of the Health, Labor and Welfare Ministry showed 930,000 junior and senior high school students were estimated to be addicted to games or the internet.

“The actual number of those addicted is unknown, but if people spend more time at home because they refrain from going out, more people could suffer from addiction,” said Susumu Higuchi, the director of the center.

In May 2019, the World Health Organization (WHO) dubbed the condition in which daily activities and health are seriously affected by video games as “gaming disorder,” defining the behavior as a mental illness like alcoholism and gambling addiction.

The disease is characterized by such behavior as impaired ability to control the amount of time and frequency spent on video games and increased priority given to games over other activities.

In February of last year, the government held a liaison conference comprising relevant ministries and agencies. In addition to focusing on supporting awareness-raising programs for video game addiction prevention, the government plans to strengthen the system for counseling by compiling a manual on the characteristics of addiction and how related institutions and organizations can work together.

With specialized treatment facilities in short supply, the government will also prepare treatment guidelines for medical workers and enhance the treatment system for video game addiction.

Although effective treatment methods have not been established, some programs are on offer to treat the addiction. For example, offline camps are set up so people refrain from using their smartphones while staying on, say, a remote island rich in nature. Group treatment programs are aimed at improving the lifestyle of patients while recuperating.

“Children will rebel if their parents try to unilaterally suppress them, for example, by taking away their game consoles,” said Saya Moriyama, a clinical psychologist who works as a counselor for MIRA-i.

“It’s important to pay attention to children’s efforts, communicate with them and make rules together, such as setting a time limit for games,” she said.