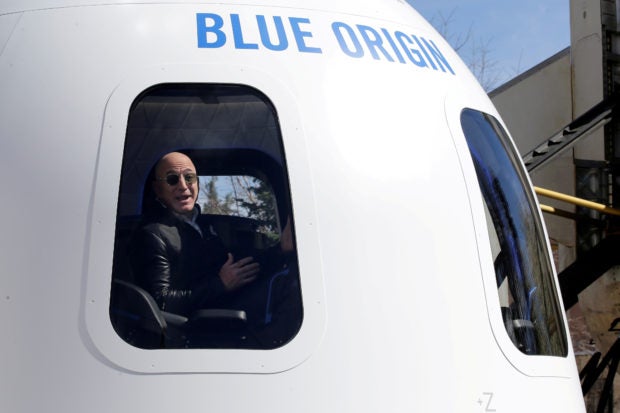 SEATTLE — Freed from his daily obligations at Amazon.com Inc, Jeff Bezos is expected to turn up the heat on his space venture, Blue Origin, as it faces a pivotal year and fierce competition from Elon Musk’s SpaceX, industry sources said.

The 57-year-old Bezos, a lifelong space enthusiast and the world’s second-richest person behind Musk, said last week he is stepping down as chief executive of the e-commerce company as he looks to focus on personal projects.

Blue Origin has fallen far behind SpaceX on orbital transportation and lost out to SpaceX and United Launch Alliance (ULA) on billions of dollars’ worth of U.S. national security launch contracts which begin in 2022. ULA is a joint venture of Boeing Co and Lockheed Martin Corp.

Now, Blue Origin is battling to win a competition with SpaceX and Dynetics to develop a new lunar lander for NASA’s potentially multibillion-dollar push to return humans to the moon in a few years. Dynetics is owned by Leidos Holdings Inc.

Winning the lunar lander contract – and executing its development – are seen by Bezos and other executives as vital to Blue Origin establishing itself as a desired partner for NASA, and also putting Blue on the road to turning a profit, the people said.

With limited revenue streams, Bezos has been liquidating about $1 billion of Amazon stock annually to fund Blue, which he said in 2018 was “the most important work that I’m doing.”

A Blue Origin representative declined to comment but pointed to comments Bezos made last week when he said he was stepping down as Amazon’s chief executive.

He told Amazon employees he would “stay engaged in important Amazon initiatives” but also devote time to Blue Origin and various philanthropic and media “passions.”

NASA is expected to winnow the lunar lander contest to just two companies by the end of April, adding pressure as Blue Origin works through problems such as wasting millions of dollars on procurement, and technical and production challenges, the sources said.

Another source, however, said Blue has modified its design since it was awarded the initial contract last April and that its current design fits on an additional number of available and forthcoming rockets, including Musk’s Falcon Heavy and ULA’s Vulcan.

“He is going to kick Blue Origin into a higher gear,” said one senior industry source with knowledge of Blue’s operations.

Bezos already has transplanted Amazon’s culture on Blue, down to enforcing similar “leadership principles” and kicking off meetings by reading documents in silence, sources say.

But one industry veteran said Bezos needs to take a hands-on, operational role if he is going to fix a number of problems like bureaucratic processes, missed deadlines, high overhead, and engineer turnover which, according to this source, have emerged as Blue Origin seeks to transition from development to production across multiple programs.

One person familiar with the matter said that Bezos has no desire to immerse himself completely in daily operations, and instead would prioritize major initiatives and new endeavors.

In his latest Instagram posts, Bezos is seen climbing into a crew capsule wearing cowboy boots, and sitting in his pickup truck watching a rocket engine test, which he described as a “perfect night!”

Founded in 2000, Blue Origin, based in Kent, Washington, has expanded to around 3,500 employees, with sprawling manufacturing and launch facilities in Texas, Florida, and Alabama.

Its ambitious portfolio includes selling suborbital tourist trips to space, heavy-lift launch services for satellites, and the lander – none of which is yet fully commercially viable.

Recent data shows Blue has overcome combustion stability problems on its BE-4 rocket engine – another business line, two sources said. Test engines for ULA’s inaugural Vulcan rocket are expected to arrive at Florida’s Cape Canaveral this week, with the first flight engines and booster coming later this spring, one added.

SpaceX said Thursday it had 10,000 users on its nascent satellite-based broadband service, dubbed Starlink, which Musk says will provide crucial funding to develop his Starship rocket for missions to the moon and, eventually, Mars.

Blue is also hoping for a steady stream of revenue for its heavy-lift New Glenn rocket – potentially set for a debut late this year – from Amazon’s forthcoming constellation of some 3,200 satellites dubbed Project Kuiper, sources say.

Amazon aims to have half the constellation in orbit by 2026, but there is no public timeline for a first launch.

Until now, Bezos has devoted one day a week to Blue Origin, with conference room meetings replaced in recent months by video calls, due to the coronavirus pandemic, the sources said.