Twitter wants you to think twice before posting that reply 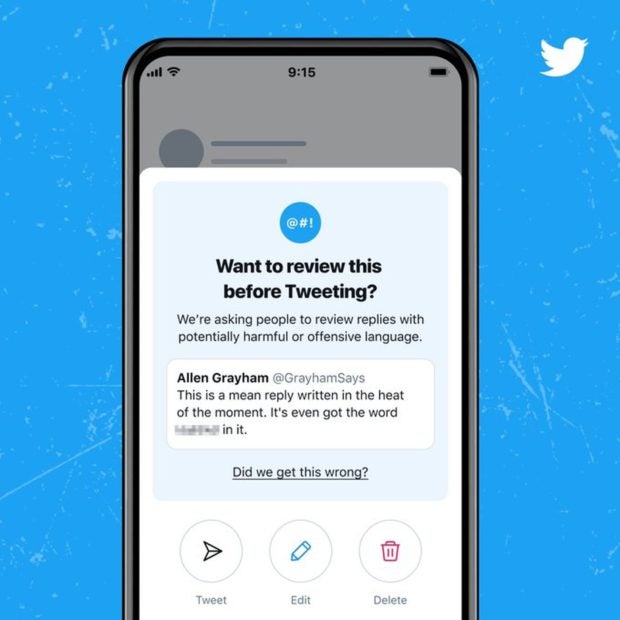 On Twitter, replies to certain tweets can sometimes be unpleasant or offensive. So why not call out users just as they’re about to post this kind of message? Twitter is currently testing a feature that displays warning prompts explaining why a tweet reply has been flagged as potentially harmful, and giving users the option to reword their reply (or not) before they post it.

“This is a mean reply written in the heat of the moment.” That’s the kind of alert that users of Twitter’s iOS application might now see. The social network has decided to continue its trials in calling out users as they prepare to post messages with harmful content or potentially offensive remarks. The aim is to help users avoid posting something they might regret, while encouraging them to choose their words carefully.

Say something in the moment you might regret? 😬 We've relaunched this experiment on iOS that asks you to review a reply that's potentially harmful or offensive.

Think you've received a prompt by mistake? Share your feedback with us so we can improve. pic.twitter.com/t68az8vlYN

The social network launched a similar prompt system in May 2020, updating it in August that year before announcing these latest modifications, Feb. 22. While this experimental system already sent users alerts prompting them to consider rethinking their words, Twitter will now indicate why the reply has been flagged for potentially harmful content. This more informative approach should help users better understand why they might have received such a prompt.

The user then has three options: tweet the reply anyway, without making any changes, edit the reply, or delete it entirely. When contacted, Twitter did not say whether the platform had plans to let users edit tweets or replies after publication, a function that is already available on other social networks, such as Facebook and Instagram.

This isn’t the first system that Twitter has tested in the aim of encouraging users to stop and think about the content they share on the platform. By alerting users about to share an article they hadn’t even read, the social network reported users opening articles 40% more often after seeing such a prompt. JB