Last week, the world saw the United States’ National Aeronautics and Space Administration (NASA) successfully land the Perseverance rover on Mars—the fifth to ever set its wheels on the Red Planet.

As mankind celebrates yet another of its biggest achievements in space exploration, here’s a look at the names of six Philippine towns that have reached Earth’s neighboring planet as well.

It should be noted, however, that the naming process of such features is not intended to commemorate the towns, according to the International Astronomical Union (IAU) Working Group for Planetary System Nomenclature (WGPSN), which is responsible for the process.

Small craters—approximately 50 km wide or smaller—are named after small towns around the world with a population of around 100,000 or less, according to the Gazetteer of Planetary Nomenclature of the United States Geological Survey. Larger ones are, meanwhile, named after scientists and science fiction writers who contributed to the study or lore of the Red Planet.

With that said, here are the six craters on Mars that have adopted the names of Philippine towns: 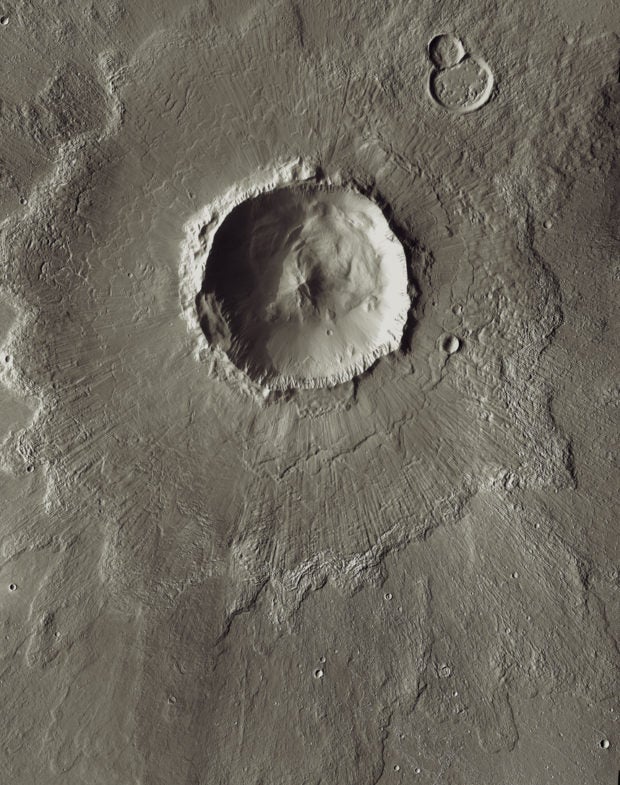 Since 2006, a Martian crater 21.58 km wide (around 12 miles) has been borrowing the name of the town of Bacolor in Pampanga.

The photo above is a combination of images taken from September 2002 to October 2006 by the Thermal Emission Imaging System (THEMIS) instrument on NASA’s Mars Odyssey orbiter.

According to NASA, the ejecta blanket surrounding the crater rim comes from “a surge of superheated gas and debris flying outward in the wake of the meteorite impact that made the crater.”

The Camiling Crater, which has a diameter of 21.91 km (around 13 miles), has, meanwhile, been borrowing the name of the town of Camiling in Tarlac since 1976.

The Daet Crater, which is 10.58 km wide (around 6.5 miles), is named after the town in Camarines Norte. It has also been carrying the name since 1976.

It is located at 7.29 degrees south latitude, 318.2 degrees east longitude.

The Solano Crater, which is 9 km wide (around 5.5 miles), is named after the town in Nueva Vizcaya. The name was approved back in 1991.

The Taytay Crater, which has a diameter of 18.17 km (around 11 miles), is named after the town in Palawan, which is not to be confused with the municipality in Rizal. It has been holding the said name since 2006.

As the Perseverance mission on Mars is still fresh, Filipino engineer Gregorio Villar has also been making headlines for being part of the mission, which was led by Indian-American engineer Swati Mohan. Villar is an entry, descent and landing systems engineer working for the NASA Jet Propulsion Laboratory.

Back home, Filipino engineers have, meanwhile, finally launched into space the second Filipino-made nanosatellite called Maya-2. It took off on the Northrop Grumman CRS-15 mission at 1:36 a.m., Philippine Standard Time, on Feb. 21.  /ra