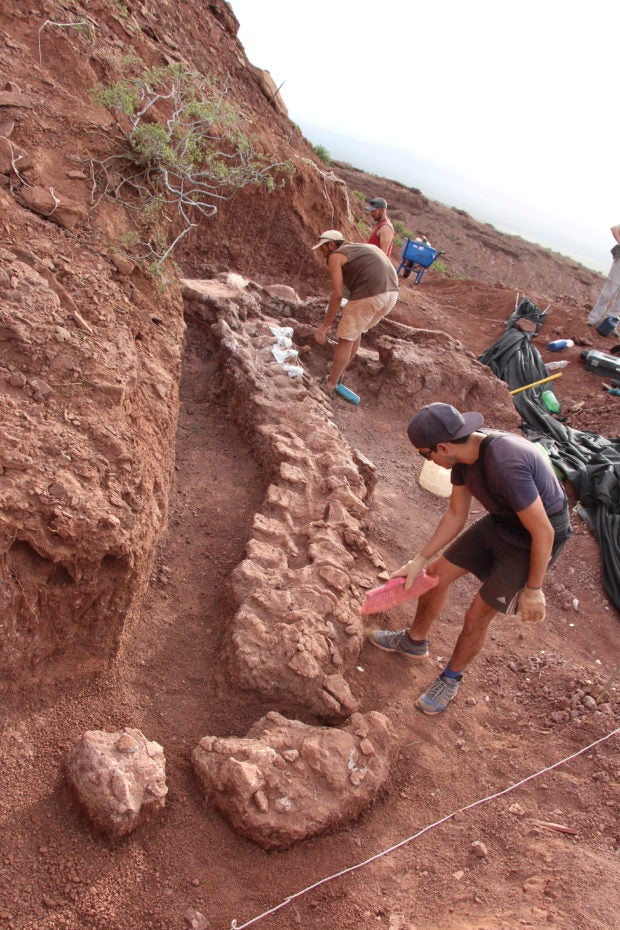 BUENOS AIRES — Scientists have unearthed in Argentina’s Patagonian wilderness fossils of what may be the oldest-known member of the dinosaur group known as titanosaurs that includes the largest land animals in Earth’s history.

Researchers said on Monday the fossils represent a dinosaur species named Ninjatitan zapatai that lived 140 million years ago during the Cretaceous Period. They identified Ninjatitan as a titanosaur, a group of long-necked plant-eating dinosaurs that walked on four pillar-like legs.

The dinosaur’s incomplete skeletal remains were discovered south of the city of Neuquen. The researchers said Ninjatitan demonstrated that the titanosaurs as a group first appeared longer ago than previously known.

“It is the oldest record known, not only from Argentina but worldwide,” study lead author Pablo Gallina, a researcher at the National Council for Scientific and Technical Research of Argentina (CONICET), told Reuters. “Titanosaurs are recorded on various sides of the world, but the oldest-known records were more modern than this find.”

At a length of about 65 feet (20 meters), Ninjatitan was a large dinosaur, but much smaller than later titanosaurs such as Argentinosaurus that reached a length of around 115 feet (35 meters). The researchers also said the presence of such an early titanosaur in Patagonia supports the idea that titanosaurs originated in the Southern Hemisphere.

The findings were published in the scientific journal Ameghiniana.

Titanosaurs are part of a larger dinosaur group called sauropods that includes others with similar body designs such as Brontosaurus and Diplodocus that lived in North America during the Jurassic Period, which preceded the Cretaceous Period.

A number of the titanosaurs that inhabited Patagonia achieved gigantic proportions such as Argentinosaurus, Patagotitan and Dreadnoughtus.

José Luis Carbadillo, another CONICET researcher, told a local university publication that the age of Ninjatitan’s remains could have led people to assume that the bones belonged to a dinosaur group that pre-dated titanosaurs.

“In Patagonia, titanosaurs are only known about from less than 120 million years ago,” he said.