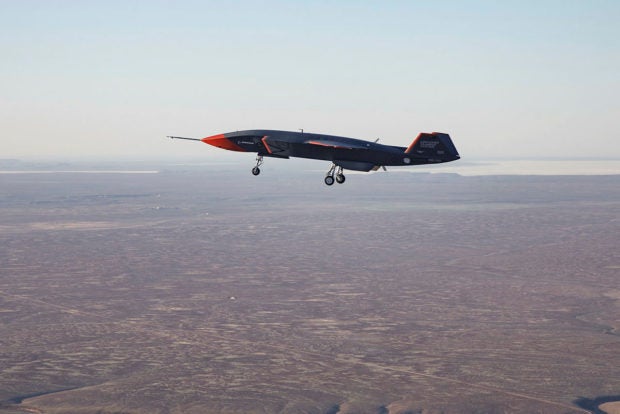 It flies! Boeing’s first autonomous drone powered by artificial intelligence, the Loyal Wingman, has just successfully completed its first flight in collaboration with the Australian army. It should soon be integrated into  flights alongside other aircraft. In the future, it could also help in various civilian missions.

The Royal Australian Air Force (RAAF) has posted a video of this device’s first flight, a test overseen by Boeing’s teams.

This is a pioneering project in this domain, first announced by the American manufacturer in the form of a concept back in 2019. Thanks to on-board artificial intelligence, the aircraft can make decisions in flight even faster than a human on the ground responsible for controlling it.

This UAV (unmanned aerial vehicle) is 11.7-meter long and has a 3-meter wingspan. Its range is estimated at around 3500 kilometers of flight and it can fly alone or within a squadron. In any case, it will be possible for the uncrewed aircraft to take more risks than an ordinary aircraft with a pilot on board.

The idea is not to turn it into a war machine. In fact, several elements of the UAV are interchangeable, allowing it to be transformed, depending on the mission, by adding missiles or various sensors. In the civilian sector, such a UAV could very well be used one day for exploration and research missions.

While Boeing is responsible for launching the initial basis for this project with the Australian army, which should soon have about 15 drones, this UAV could interest other defense forces in the future.

A first flight within a squadron is scheduled for later this year. JB