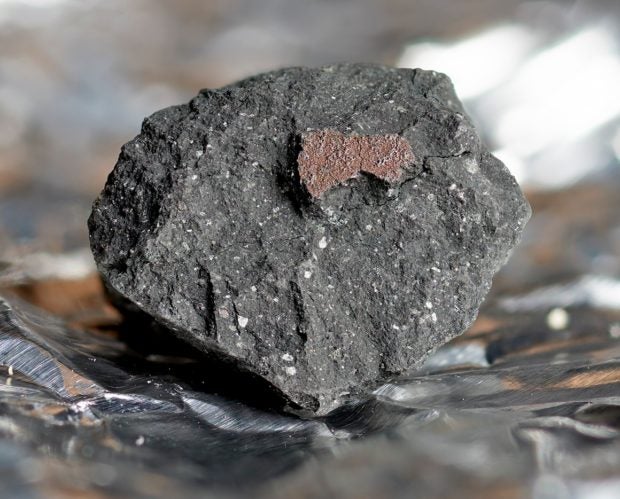 A fragment of the Winchcombe meteorite. Image: Trustees of the Natural History Museum

Several fragments of an incredibly rare meteorite found in the United Kingdom are said to contain the “building blocks of life.”

A “fireball shower” lit up the U.K. and Northern Europe’s evening skies for a few seconds on Feb. 28, bringing with it an extremely rare kind of meteorite.

Researchers believe fragments of the meteorite found in the town of Winchcombe in England could provide some answers about the origins of the solar system when it was formed billions of years ago, as stated in a release by the Natural History Museum in London on March 9.

Since the meteorite landed in Winchcombe, it has been referred to as the “Winchcombe meteorite.” Its fragments are still undergoing analysis and further studies, but scientists are impressed by the phenomenon so far.

“This is the first time since 1991 that a piece of space rock has landed and been recovered in the U.K.,” the museum stated.

Dr. Ashley King, who researches for the museum, said that the Winchcombe meteorite “looks a bit like coal” but is “much softer and is really quite fragile.”

“It is exciting for us because more this type of meteorite is incredibly rare but hold important clues about our origins,” she said.

Given the meteorite’s rare properties, scientists are also hoping to find answers about the origins of life on Earth. Prof. Sara Russell, who is also a researcher at the museum, believes their findings were compelling.

“There are about 65,000 known meteorites in the entire world, and of those only 51 of them are carbonaceous chondrites that have been seen to fall like this one,” she explained.

Russell also named space missions Hayabusa2  and OSIRIS-REx that yielded asteroid sample materials which are similar to the ones found in the meteorite.

“Meteorites like this are relics from the early Solar System, which means they can tell us what the planets are made of,” Russell added.

She explained that meteorites like the Winchcombe meteorite may have also brought water to Earth, giving life to the planet’s oceans. JB