Narzo 30A realme’s newest ‘Gaming Monster’ for the budget seekers

Gaming enthusiasts and casual gamers, already a huge group of people growing exponentially by the day, now have something to look forward to when it comes to the perfect gaming smartphone that will fit their expectations price-wise and specs-wise. 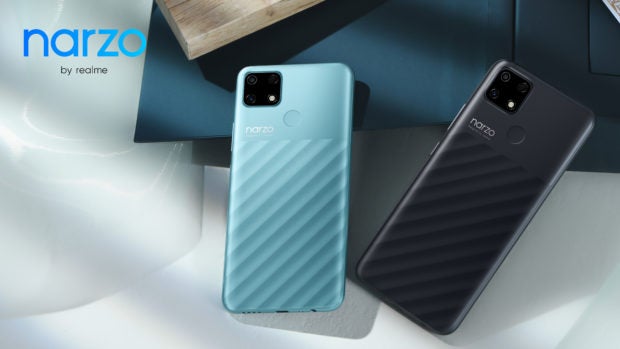 Tagged as a “limitless gaming monster” because of its powerful processor and unbelievable long battery life, the narzo 30A is the first smartphone launched by realme this year. It is also the newest addition to realme’s roster of devices making up the brand’s recently launched TechLife movement.

TechLife is realme’s foray into the IOT devices that power homes intelligently and make life convenient. Covering a range of audio, wearables, smart home appliances, and smartphones, realme’s TechLife aims to elevate the lifestyle of every young Filipino through the enjoyment of these smart devices that are within the reach of their pockets.

Narzo 30A is a follow up to the hugely successful narzo 20, the budget-friendly gaming smartphone launched late last year. A stunning smartphone priced reasonably, the narzo 30A is packed with specs that meet every gamer’s expectations of a gaming device.

For example, under the smartphone’s hood is a MediaTek Helio G85 gaming chipset, which is capable of running some of the most popular mobile games in the Philippines such as Call of Duty, Mobile Legends, LoL Wild Rift, Genshin Impact and Asphalt 9: Legends.

As a gaming device, the narzo 30A offers by far the longest battery life with its 6000mAh mega battery—allowing users to enjoy multiple tasks such as gaming, social media, school online sessions and other daily routines. Battery life can extend up to 57 days on standby, or 46 hours of call, 60 hours of music streaming, and 28 hours of video playback. The smartphone also features a fast-charging capability through its 18W Type-C port.

realme’s narzo 30A is part of the brand’s efforts to empower more Filipinos to take their gaming experience further. In fact, the brand has on boarded the country’s top gamers, shout casters, and gaming influencers to further strengthen its presence in the local gaming scene.

In the coming months, realme has scheduled a lineup of events that present more opportunities for Filipino gamers to thrive.

According to Newzoo, mobile devices remain the platform of choice for gamers in the Philippines, with 74 percent of the country’s online population playing games on a smartphone or a tablet. However, not all have access to highly capable technology.

Through the launch of the newest affordable gaming smartphone and support for the local gaming community’s growth, realme reiterates its commitment to coming out with powerful gaming devices that do not break the bank.

realme Philippines had an initial sale of the narzo 30A last March 25 after its official launch in the country. The narzo 30A will be available on March 27 during Lazada’s Birthday Sale, where you can get a P500 discount off the SRP of P6,490.

Also, during the Lazada Birthday Sale, a roster of realme devices will be retailing at discounted prices, not just the realme narzo 30A. Among those to receive the biggest discounts are the realme 7 and 7 Pro, which will be available for only P10,490 and P13,990, respectively.

Audio lovers are also in for a treat as the realme Buds Classic and Buds Q get a 51-percent and 40-percent discount, leaving their final sale prices at P290 and P890, respectively. The highly competitive TWS device realme Buds Air Pro can also be bagged at a much lower price of P3,790. A P300 discount awaits those who will be purchasing the realme smart lifestyle devices Powerbank 2i, N1 Sonics Electric Toothbrush and Selfie Tripod.

TOPICS: Narzo 30A, realme
Read Next
Ship stuck in the Suez Canal unleashes flood of Internet jokes
EDITORS' PICK
Garcia softens stance, meets IATF halfway on swab-upon-arrival policy
Want to help local farmers? Shop small and eat Real Food
ICC is everything but a court of ‘white people’
Manila is 78th most expensive city in the world for foreign workers
TeaM Energy pushes development programs to help in pandemic rebound
Piolo Pascual: The Ultimate Heartthrob continues to level up
MOST READ
Sharon Cuneta on living in the US: ‘Nagagawa ko lahat ng normal na bagay’
Mike Nieto asks fans: ‘No below the belt remarks’ toward South Korea
Duterte-Duterte tandem possible but ‘winnability is another question’ — Binay
ICC is everything but a court of ‘white people’
Don't miss out on the latest news and information.