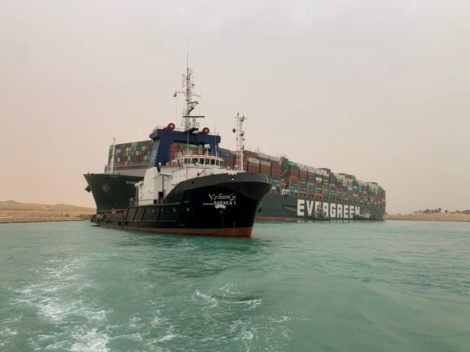 FILE PHOTO: A container ship that was hit by strong wind and ran aground is pictured in Suez Canal, Egypt March 24, 2021. SUEZ CANAL AUTHORITY/Handout via REUTERS/File Photo

TOKYO — A giant ship has blocked the famous Suez Canal but opened up a torrent of memes and gifs lampooning the hapless container carrier, which has been jammed in the waterway since Tuesday.

Elements of global commerce have been brought to a standstill, but no one was hurt, and the environment is so far undamaged. The lack of stakes surrounding the Ever Given’s grounding has made it a prime target for jokes.

Nine tugs attempted to move it while getting some help from the shore with two workers and a digger clawing into the sandy embankment where the Ever Given’s bow is dug in.

Images of them – dwarfed by the hull of the monster they were trying to dig out – circulated with comments on Twitter such as “these two guys and their digger are currently trying to save global trade.”

The Twitter account @SuezDiggerGuy, “Guy With the Digger at Suez Canal,” had nearly 15,000 followers by around 0600 GMT Friday and a profile line that read: “Trying my best. No promises.”

Its timeline was replete with observations such as “Thinking of naming my digger, Ever Digging” and bemoaning having his leave rescinded by managers.

Netizens also conjured up Lego images of the digger and the bow of the container ship, which is carrying consumer goods from Chinese factories to European households.

Once it became clear the ship could be stuck for weeks, a website quickly spun up.

And the memes filled the internet like cargo ships piling up in the Red Sea. Many of the most popular touched on the angst of the last pandemic-filled year; one labeled the hulking ship “my COVID depression & anxiety” and the tiny digger on shore as “going on a daily walk.”