X-rays discovered on Uranus for the first time 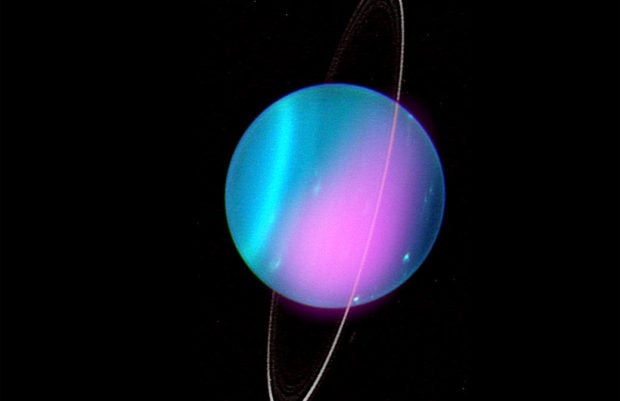 Astronomers confirmed that Uranus is emitting X-rays for the first time, a discovery that may help people in learning more about the distant and cold planet.

NASA’s new research analyzed data about Uranus from the Chandra X-ray Observatory in 2002 and 2017, as per a release by the agency yesterday, March 31. There was a clear detection of X-rays in the 2002 observation and a possible flare of it in 2017, astronomers said.

The agency said it is possible that X-ray emissions from Uranus are caused by the Sun, much like how planets like Jupiter and Saturn scatter X-ray light. But there was also some evidence pointing to Uranus being the source of its own X-rays. If this is the case, Uranus may be producing X-rays through its rings like Saturn.

“Uranus is surrounded by charged particles such as electrons and protons in its nearby space environment. If these energetic particles collide with the rings, they could cause the rings to glow in X-rays,” NASA said in its statement.

NASA is also looking into the possibility that the X-rays are coming from auroras on Uranus. But compared to other planets like Earth whose auroras are produced in the planet’s magnetic field, scientists are not sure what is causing the phenomenon on Uranus.

There is still much to learn about Uranus since it has only been visited by an Earth spacecraft once, by Voyager 2. Scientists hope that more observations from Chandra and the Hubble Space Telescope would help them find out what is happening on the planet. JB