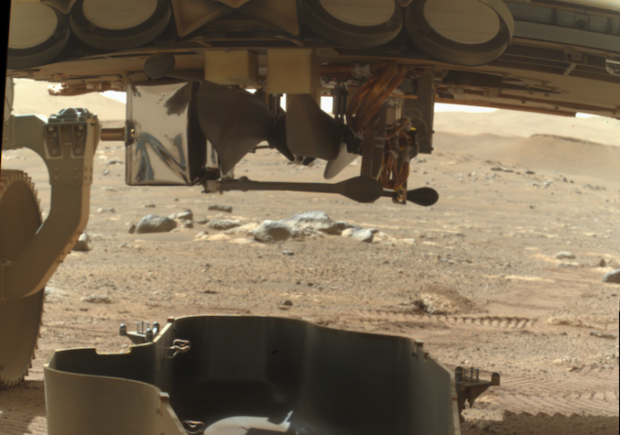 NASA’s Mars rover Perseverance is set to deploy Ingenuity, the first off-Earth rotorcraft or mini helicopter to take flight on the Red Planet.

The space agency announced that Ingenuity got its first look at Mars through a post on Perseverance’s Twitter account yesterday, March 22. It showed a photo of the rover’s dropped debris shield, exposing the rotorcraft to the planet’s sunlight for the first time.

“Away goes the debris shield, and here’s our first look at the helicopter. It’s stowed sideways, folded up and locked in place, so there’s some reverse origami to do before I can set it down,” NASA stated, adding that the rover will first travel to a designated “helipad” before deploying Ingenuity.

Away goes the debris shield, and here’s our first look at the helicopter. It’s stowed sideways, folded up and locked in place, so there’s some reverse origami to do before I can set it down. First though, I’ll be off to the designated “helipad,” a couple days’ drive from here. pic.twitter.com/E9zZGQk5jQ

The exact date for when Ingenuity can start flying over Mars is still unknown as engineers try to work out details for deployments and positioning the rover. However, test flights are expected to begin by the first week of April, NASA stated in a release last March 18.

Ingenuity traveled to Mars while attached to the Perseverance’s belly. The rover’s debris shield helped protect the mini helicopter during its Feb. 18 touchdown on the planet.

The rotorcraft is expected to provide environmental monitoring and imaging support on Mars, as scientists continue to look for signs of past life on the planet. It has a limited flight duration of 31 days. JB