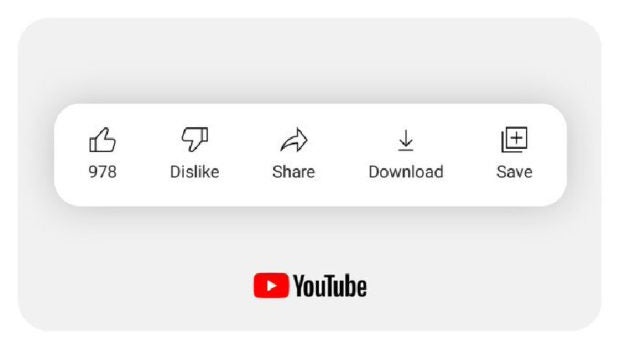 Thumbs down to the thumb down. The video platform would like to make the number of “dislikes” that a video receives disappear from view. YouTube launched a test on the matter with a specific goal, to protect the mental health of its creators.

It was on Twitter, as well as on its own platform, that YouTube announced this test concerning viewer approval and disapproval. The goal is to hide the number of “dislikes,” those thumbs down, in order to prevent any actions maliciously taken to increase these numbers.

The streaming platform justified this test for the sake of its YouTubers: “In response to creator feedback around well-being and targeted dislike campaigns, we’re testing a few new designs that don’t show public dislike count. If you’re part of this small experiment, you might spot one of these designs in the coming weeks (example below!).”

👍👎 In response to creator feedback around well-being and targeted dislike campaigns, we're testing a few new designs that don't show the public dislike count. If you're part of this small experiment, you might spot one of these designs in the coming weeks (example below!). pic.twitter.com/aemrIcnrbx

This new interface aims to discourage the malevolent actions of some internet users against certain creators’ videos. According to YouTube, these numbers could have an impact on the well-being of creators. The platform wants to stop the phenomenon of increasing the number of “dislikes” simply to see the number grow.

If these numbers become invisible to the public, creators will still be able to know the exact number of dislikes through YouTube Studio, according to the video platform. Indeed, while the number may no longer appear, the function will still be available. Viewers will still be able to express their dissatisfaction with the thumbs down icon. For the moment this test concerns just a small group of users, YouTube outlined. JB

One out of four web users too lax on access to their microphone, webcam