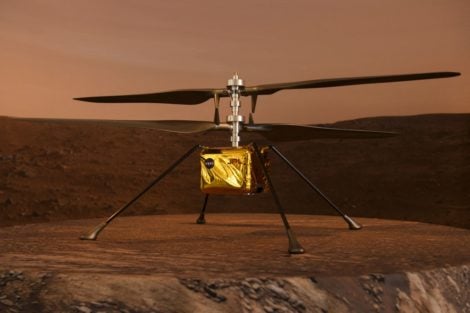 A full-scale model of the experimental Ingenuity Mars Helicopter, which will be carried under the Mars 2020 Perseverance rover, is displayed at NASA’s Jet Propulsion Laboratory (JPL) on February 16, 2021, in Pasadena, California. – The Mars exploration rover will search for signs of ancient microbial life and collect rock samples for future return to Earth to study the red planet’s geology and climate, paving the way for human exploration. Perseverance also carries the experimental Ingenuity Mars Helicopter – which will attempt the first powered, controlled flight on another planet. (Photo by Patrick T. FALLON / AFP)

Data and images from the autonomous flight were transmitted 173 million miles (278 million kilometers) back to Earth where they were received by NASA’s array of ground antennas and processed more than three hours later.

Engineers were tensely watching their screens at the Jet Propulsion Laboratory in California, where the mission had been designed and planned for the past six years.

They broke into applause as one of them read off a checklist of tasks Ingenuity had achieved and concluded: “Ingenuity has performed its first flight — the first flight of a powered aircraft on another planet.”

Ingenuity quickly sent back a black-and-white image from its downward-pointing navigation camera, showing its bug-like shadow cast on the surface.

Then came a choppy color video from the Perseverance rover showing Ingenuity on the ground, in-flight, and then once again at rest.

More images and a smoothed-out video are expected to follow.

“We’ve been talking so long about our Wright brothers’ moment on Mars, and here it is,” said lead engineer MiMi Aung to her team, as she doled out virtual hugs.

The first powered flight on Earth was achieved by the Wright brothers in 1903 in Kitty Hawk, North Carolina.

A piece of fabric from that plane has been tucked inside Ingenuity in honor of that feat.

NASA had originally planned the flight for April 11 but postponed it over a software issue that was identified during a planned high-speed test of the aircraft’s rotors.

The issue was later resolved through the help of a software update and tweak in coding.

Ingenuity traveled to Mars attached to the underside of Perseverance, which touched down on the planet on February 18 on a mission to search for signs of extraterrestrial life. 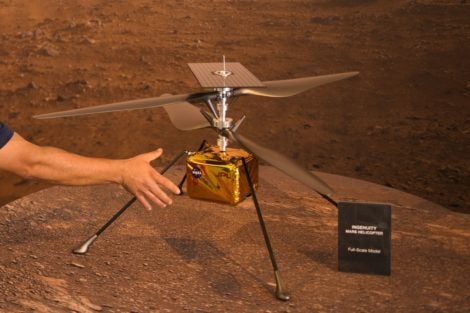 A staff member places a full-scale model of the Ingenuity Mars Helicopter at NASA’s Jet Propulsion Laboratory (JPL) on a table ahead of the Mars 2020 Perseverance rover landing on February 18, 2021, in Pasadena, California. – The Mars exploration rover will search for signs of ancient microbial life and collect rock samples for future return to Earth to study the red planet’s geology and climate, paving the way for human exploration. Perseverance also carries the experimental Ingenuity Mars Helicopter – which will attempt the first powered, controlled flight on another planet. (Photo by Patrick T. FALLON / AFP)

Ingenuity’s goal, by contrast, is to demonstrate its technology works, and it won’t contribute to Perseverance’s science goals.

But it is hoped that Ingenuity can pave the way for future flyers that revolutionize our exploration of celestial bodies because they can reach areas that rovers can’t go, and travel much faster.

“We don’t know exactly where Ingenuity will lead us, but today’s results indicate the sky — at least on Mars — may not be the limit,” said acting NASA Administrator Steve Jurczyk.

The flight was challenging because of conditions vastly different from Earth’s — an atmosphere that has less than one percent the density of our own, and the gravitational pull of only a third.

That made it necessary for Ingenuity’s rotors to achieve around 2,500 revolutions per minute, roughly five times greater than helicopters achieve on Earth.

As well as high-tech components, the aircraft contains many off-the-shelf smartphone parts that were tested in space for the first time on this mission.

Ingenuity was deployed to its “flight strip” on April 3 and is now in the 16th sol, or Martian day, of its 30-sol (31-Earth day) flight test window.

The team will continue to receive and analyze data in the coming days, then formulate a plan for the second flight, which would be no earlier than April 22.

“We will take a moment to celebrate our success and then take a cue from Orville and Wilbur regarding what to do next,” said Aung.

“History shows they got back to work — to learn as much as they could about their new aircraft — and so will we.”