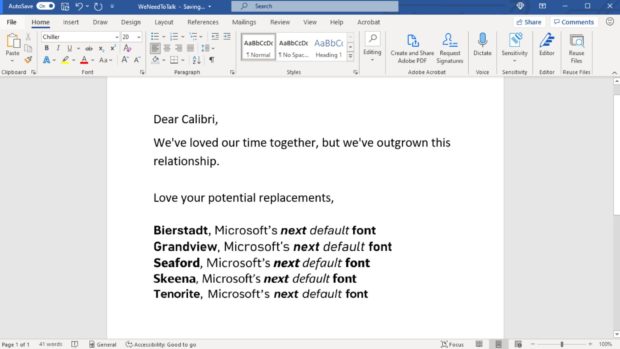 After 14 years, Microsoft will finally let go of Calibri as its default font across its platforms as it is now “time to evolve.”

“Dear Calibri, We’ve loved our time together, but we’ve outgrown this relationship,” Microsoft posted on Twitter.

We need to talk. What should our next default font be? pic.twitter.com/fV9thfdAr4

Calibri has been Microsoft’s default font since 2007, when it replaced Times New Roman across all platforms. While it will be replaced from its default-font status, fans of the font may still use it anytime they want.

“It has served us all well, but we believe it’s time to evolve. To help us set a new direction, we’ve commissioned five original, custom fonts to eventually replace Calibri as the default,” the Microsoft Design Team said in a release.

Microsoft will apparently make its decision based on users’ feedback, as the company asked them to share their opinions via its official Twitter page.

Users can now use the five new fonts across Microsoft 365 apps by downloading them via the cloud.  /ra

After last year’s cancellation, E3 2021 to push through virtually this June