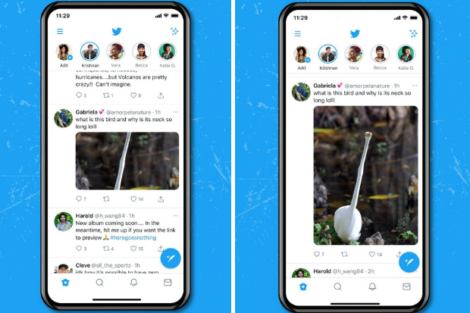 Twitter has finally rolled out its latest update that removes automatic image cropping—and the internet is celebrating its newfound freedom.

“[No] bird too tall, no crop too short,” Twitter announced earlier today, May 6. “[Introducing] bigger and better images on iOS and Android, now available to everyone.”

no bird too tall, no crop too short

introducing bigger and better images on iOS and Android, now available to everyone pic.twitter.com/2buHfhfRAx

Twitter specifically noted that photos with 2:1 and 3:4 aspect ratios will be shown in full when mobile users skim through their timeline.

Users of the social media platform have since been celebrating the new update by posting “tall” photos of their own, giving rise to all sorts of memes.

YouTube channel Watcher, for one, tested out the new feature by sharing a photo of the famously tall Shane Madej in costume as Krampus.

The Twitter account of social media site 9gag, meanwhile, welcomed the new feature by sharing a photo of Tom Hiddleston’s Loki, who is giving a thumbs up in his full, uncropped glory.

Twitter user @Nightbat152, meanwhile, replied to Twitter’s post by posting a photo of a very tall bird while asking, “tf is this?” which prompted Twitter to reply, “it’s only the long necked egret duh.”

it's only the long necked egret duh

Aside from memes, people will also be able to post their artwork and photographs without the fear of having them cropped on the timeline, and many have already started sharing their own.

“[Now that Twitter] crop is gone I can finally post my art properly!” animator and game developer Kianna Mosser, meanwhile, said as she posted her work.

Artist @summersnoqueen also took advantage of the update and shared an artwork of her own, posting, “goodbye twitter crop!!! [It’s] finally time for my big ballgown girls to shine.”

Despite the warm welcome from users, however, some have been lamenting the death of the “open/press for a surprise” meme on the platform as images will now be immediately shown in full.

Before the update, users had to press images that appear on their timeline in order to view the whole photo, which is a feature that allowed such memes.

“People that tweet ‘open for surprise,'” Twitter user @its_meinab posted as he shared a photo of a disappointed Will Smith edited to look like Pain from the “Naruto Shippuden” anime and manga.

Another Twitter user with the handle @nicholasdante_ also poked fun at the fact as he joked that “open for a surprise caption users” must be having a breakdown similar to Viola Davis’ Annalise Keating from “How to Get Away with Murder.”

the "open for surprise" caption users now that the twitter crop is gone pic.twitter.com/T9TUlQHniY

The said update comes just a month after Twitter also rolled out a feature to allow Android and iOS users to upload images in 4K. With the two features now out, users are able to post a combination of large and high-resolution photos.  /ra