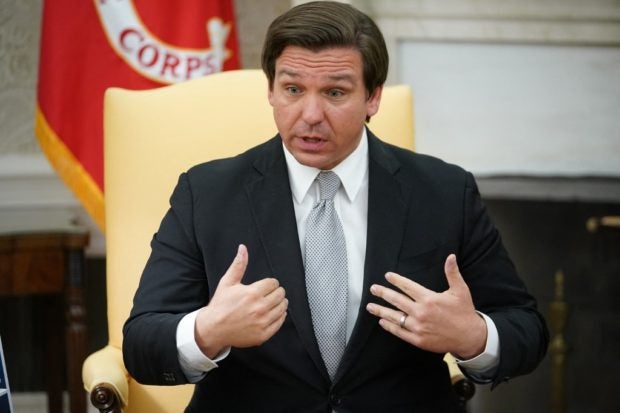 In this file photo taken on April 28, 2020, Florida Governor Ron DeSantis speaks during a meeting with US President Donald Trump in the Oval Office of the White House in Washington, DC. Florida Governor Ron DeSantis signed a law on May 24, 2021, which bars social media firms from “de-platforming” political candidates, drawing immediate fire from civil liberties activists and the tech industry. Photo by MANDEL NGAN / AFP

The law marked the latest salvo in a political battle over social media content moderation following a bitter 2020 US election and the banning by major platforms of then-president Donald Trump, who was impeached for inciting the January 6 Capitol rampage.

The law would impose fines of $250,000 a day if social media firms remove an account of a statewide political candidate.

It also allows Floridians to sue technology firms if they face “unfair” treatment.

“Many in our state have experienced censorship and other tyrannical behavior firsthand in Cuba and Venezuela,” he said.

“If Big Tech censors enforce rules inconsistently, to discriminate in favor of the dominant Silicon Valley ideology, they will now be held accountable.”

The governor added: “Any Floridian can block any candidate they don’t want to hear from, and that is a right that belongs to each citizen — it’s not for Big Tech companies to decide.”

But the bill was certain to face legal challenges under the Constitution’s First Amendment free speech provisions, and critics said it would have the unintended effect of encouraging disinformation by making it harder for platforms to set rules.

“When it comes to free speech, a website is no different from a newspaper or a parade: it has a fundamental right to decide what speech it will allow, and what speech it won’t, on its platform.

“Florida is trying to force a few large platforms to host speech they otherwise wouldn’t. This kind of blatant content- and speaker-based discrimination is unconstitutional.”

Matt Schruers, president of the Computer & Communications Industry Association, which represents many tech firms, said the law is likely to unleash a flood of litigation and not achieve its stated goals.

“Lawsuits and jackpot judgments are a prescription for promoting plaintiffs’ litigation, not free speech. This bill will result in even fewer options for users to express themselves online,” Schruers said.

“Even when a frivolous lawsuit is tossed out, litigation costs run between five and six figures. These costs could quickly add up if Florida green lights an avalanche of lawsuits from anyone who disagrees with a company’s efforts to stamp out disinformation or anti-American extremism.”