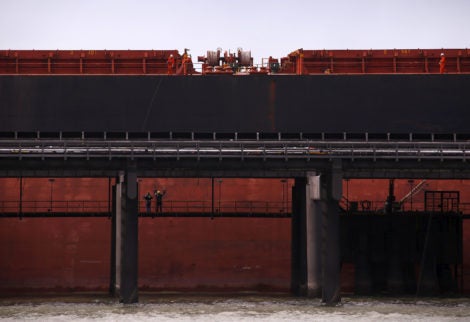 Port workers load a ship with coal at the RG Tanna Coal Terminal located at the town of Gladstone in Queensland, Australia, June 12, 2015. REUTERS/David Gray/File Photo

LONDON — Carbon emissions produced from seaborne coal exports stayed steady last year despite the impact of the coronavirus on consumption, a study showed on Wednesday, although the sector faces growing environmental scrutiny.

Coal is among the biggest commodities transported by the dry bulk shipping sector and European countries have already scaled back usage as they look for greener alternatives.

That compared with 3.4 billion tonnes of CO2 produced from coal exported by ships in 2019, Ember analysis showed.

The Group of Seven or G7 – comprising the United States, Britain, Canada, France, Germany, Italy, and Japan – plus the European Union agreed last month to stop international financing of coal projects that emit carbon by the end of this year and phase out support for all fossil fuels to meet globally agreed climate change targets.

“Exporters were already looking to Asia to compensate for declining coal demand from Europe. Lack of funding for new coal-fired power plants in growing Asian markets will slow down the growth in coal demand seen in recent years,” Fulghum told Reuters.

Stopping fossil fuel funding is seen as a major step the world can make to limit the rise in global temperatures to 1.5 degrees Celsius above pre-industrial times, which scientists say would avoid the most devastating impacts of climate change.