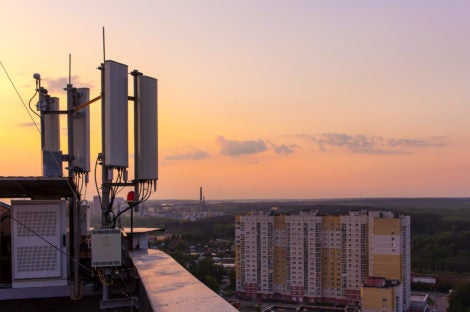 Cellular communications tower in the background of the city and beautiful sunset in summer. Stock Photo

MANILA, Philippines — Faster issuance of permits by the local government units (LGUs) has paved the way for improved telecommunication infrastructure in the country as more cellular towers and fiber-optic networks have been established nationwide.

This developed, according to the National Telecommunications Commission (NTC), amid President Rodrigo Duterte’s directive last July 2020 for swift processing of LGU permits so additional cellular towers would be built to improve communication and connectivity in the country.

There has been a significant increase in the issuance of LGU permits from July 2020 to April this year, it noted.

Fiber-optic networks in the Philippines have likewise improved, NTC said, with a total of 846,323 cable kilometers laid out as of April.

“Converge, is also expected to increase its capital expenditure from P19 billion in 2020 to P20 billion this year as it aggressively provides pure end-to-end fiber internet connection to its market.”

NTC said it expects this improvement to continue as more LGUs comply with the Joint Memorandum Circular  No. 01 of 2020 or the “Special Guidelines on the Provision of Social Amelioration Measures to the Most Affected Residents of the Areas Under Enhanced Community Quarantine” signed by the Department of Information and Communications Technology, Department of the Interior and Local Government, Anti-Red Tape Authority, and other concerned government agencies.

NTC also welcomed the Department of Public Works and Highways’ initiative to allow telecommunication companies to occupy a portion of the government’s Right of Way as part of the government’s thrust to ensure internet connectivity throughout the country.

“The new DPWH directive will help speed up implementation of telco infrastructure projects especially along national roads,” it said.